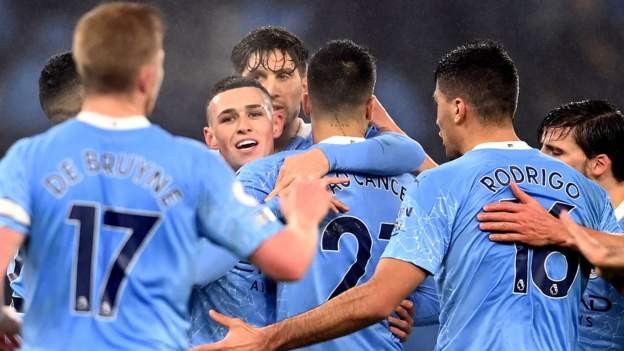 With eight goals in all competitions, Phil Foden is now Manchester City's top goalscorer this season

Manchester City extended their unbeaten run to 14 matches in all competitions with a hard-fought win over struggling Brighton.

Phil Foden grabbed the only goal just before half-time when he collected Kevin de Bruyne's pass, created space and fired into the bottom corner.

Alexis Mac Allister had perhaps the Seagulls' best chance to equalise but shot over the top.

City's fourth straight win in the league moves them up to third, although they will drop back to fourth if Tottenham win at home against Fulham in the late game on Wednesday.

Brighton, meanwhile, have now not won in nine league matches and could find themselves in the bottom three if 18th-placed Fulham come out on top at Spurs.

Relive Manchester City v Brighton as it happened and analysis

From the bottom half to title challengers

City have now not lost since 21 November when they were beaten 2-0 at Tottenham, a result that left Guardiola's side 11th in the Premier League.

However, their form has been superb since then with 11 wins and three draws in all competitions, and only three goals conceded in that period. Across league and cups, they have now won seven in a row.

What makes those statistics even more impressive is that Guardiola has repeatedly been without key players because of coronavirus, with goalkeeper Ederson, defender Kyle Walker and forwards Gabriel Jesus and Ferran Torres among those to have missed recent matches.

Against Brighton, City were missing striker Sergio Aguero, the Argentine self-isolating following contact with someone who tested positive for Covid-19. With Sterling, Jesus and Torres starting on the bench, De Bruyne operated as a makeshift centre-forward.

And the Belgium international was at the heart of City's best moves. He had a shot saved by Sanchez from a tight angle then released Mahrez, who could only shoot wide.

But just before half-time De Bruyne grabbed his ninth Premier League assist of the season when he slid a pass to Foden and the 20-year-old England midfielder did the rest, taking three touches to evade the Brighton defenders and then shooting past Sanchez.

Mahrez, Gundogan, Silva, Joao Cancelo and De Bruyne all had efforts inside the opening 20 minutes of the second half as City pushed for a second to kill the game off.

Sterling, who came on in the 82nd minute as a replacement for Foden, fired a penalty over in stoppage time after Sanchez's clumsy foul on De Bruyne.

City, champions in 2017-18 and 2018-19 and runners-up last time, are right back in contention. They are now only four points behind leaders Manchester United with a game in hand on their rivals.

Brighton lack cutting edge needed to get a point

Brighton, without a win in the Premier League since they beat Aston Villa 2-1 on 21 November, will be encouraged by their battling performance, but lacked the quality up front to get a point.

Graham Potter's side had to wait 40 minutes for their first corner, and then the delivery was poor and City quickly broke with De Bruyne forcing a fine save from Sanchez.

The Seagulls did not have a shot on target until 10 minutes into the second half and that was no trouble for Ederson as Davy Propper's strike was straight at him.

Percy Tau, making his Premier League debut more than two years after signing for Brighton, set up Mac Allister, who shot narrowly over.

Potter brought on top goalscorer Neal Maupay for Tau for the last 22 minutes, but the Frenchman could not inspire an equaliser.

Another clean sheet for City - the stats

'Back to our best' - what they said

Manchester City manager Pep Guardiola told BBC Sport: "We knew how tough it would be. Brighton had a good mentality to play.

"We had a really good first half and had chances. After we missed a really clear chance in the second half, they were better.

"We need to win these sort of games. It is a good lesson for us. Every game will be like this.

"Phil Foden is 20 years old. Look at the stats, the amount of games, the assists compared to the bigger stars in football. He can play both sides, in the middle as a false nine. He is so clever in front of goal. That is why he deserves to play."

Manchester City match-winner Phil Foden said: "It definitely feels like we're back to our best. We've taken confidence from the last few results.

"We could have done better but overall I'm very proud of the team. It's a great result.

"Brighton defended really well and had a good gameplan. To get the goal before half-time was really important. It ended up as the winning goal so I'm delighted."

Brighton pushed a very good team all the way - Potter

Brighton boss Graham Potter told BBC Sport: "We are disappointed to come away with nothing. We met a top team. I'm so proud of the players. You have to suffer here, that's how it is. We tried to attack.

"You're always on the stretch because they have fantastic players. They're so good, they drive you back. Our intention was to be on the front foot and play and attack when we could.

"The boys defended well when they had to and left everything on the pitch which is all you can ask."

On Percy Tau, Potter added: "I think you got glimpses. It's a tough game for a forward because you have to expend a lot of energy defending which takes away from the quality he has. He's got plenty of time and we need to help him."

Brighton will be searching for only their third league win of the season when they play at Leeds on Saturday, 16 January (15:00 GMT).

This was the second of four home matches in a row for Manchester City and they host Crystal Palace in the Premier League on Sunday (19:15 GMT).

Penalty conceded by Robert Sánchez (Brighton and Hove Albion) after a foul in the penalty area.

Kevin De Bruyne (Manchester City) wins a free kick in the defensive half.

Attempt blocked. Raheem Sterling (Manchester City) right footed shot from the left side of the box is blocked. Assisted by Kevin De Bruyne.

Ilkay Gündogan (Manchester City) wins a free kick in the defensive half.

Adam Webster (Brighton and Hove Albion) is shown the yellow card for a bad foul.

Bernardo Silva (Manchester City) wins a free kick in the defensive half.