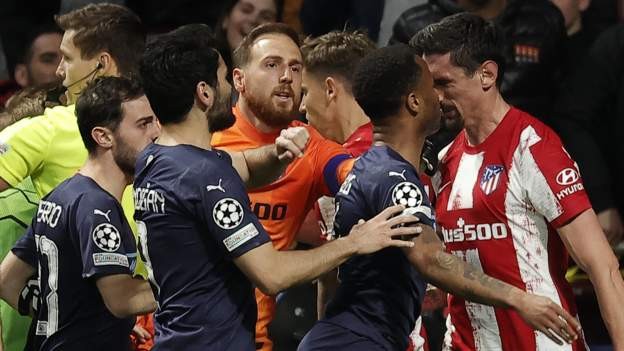 Manchester City have been fined 14,000 euros (£11,910) for the "improper conduct of the team" during the Champions League draw with Atletico Madrid last month.

City qualified for the last four after a goalless quarter-final second leg.

Atletico defender Felipe's sending-off after a foul on Phil Foden sparked a confrontation involving both sets of players and coaching staff.

The disciplinary committee of governing body Uefa has not punished Atletico.

During the incident former City defender Stefan Savic appeared to pull Jack Grealish's hair before confronting the England forward after the game.

Atletico had been ordered to close part of their stadium prior to City's visit before successfully appealing against Uefa's decision.

Uefa had ordered Atletico to close at least 5,000 seats at the Wanda Metropolitano in response to "discriminatory behaviour" by Atletico fans during the first leg in Manchester.

That punishment was overturned after a request to the Court of Arbitration for Sport.