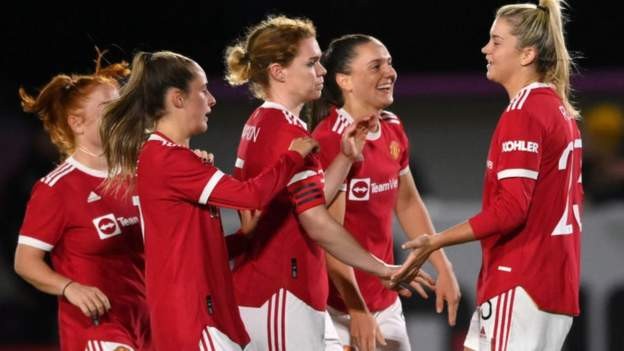 Manchester United avoided an upset in their opening Women's Continental League Cup match as they beat Durham on penalties after a 2-2 draw.

Ivana Fuso had put United ahead in the first half but Dee Bradley equalised early in the second.

Ella Toone restored the visitors' lead but Beth Hepple took the game to penalties when she levelled five minutes from time.

However, United came out on top of the shootout, which they won 5-3.

The result means Manchester United have two points in Group B while Durham have one.

Courtney Sweetman-Kirk had given Sheffield United the lead early in the first half but Keira Ramshaw equalised deep in injury time before Sunderland won the shootout 4-2.

Sunderland have two points in Group A while Sheffield United are on one.

A total of 21 clubs are split into five groups in the competition, with group-stage matches taking place between October and December.

The winners of each group are guaranteed qualification to the quarter-finals in January.

Holders Chelsea, alongside Arsenal, enter the competition after the group matches at the quarter-final stage because of Champions League commitments.