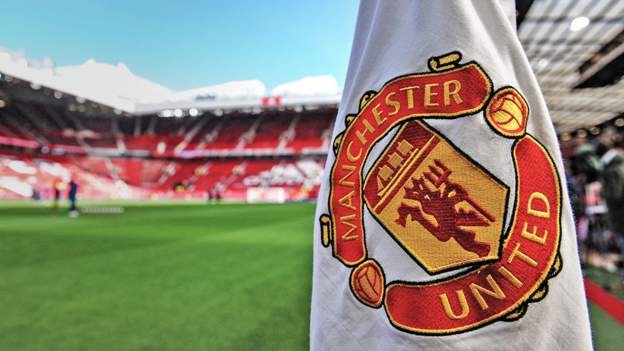 Manchester United's owners the Glazer family say they are considering selling the club as they "explore strategic alternatives".

Their move follows years of protest from fans against the ownership.

A statement from the club said the board will "consider all strategic alternatives, including new investment into the club, a sale, or other transactions involving the company".

It added that the process "will include an assessment of several initiatives to strengthen the club, including stadium and infrastructure redevelopment, and expansion of the club's commercial operations on a global scale" to enhance "the long-term success of the club's men's, women's and academy teams, and bringing benefits to fans and other stakeholders".

In 2012, the Glazers sold 10% of their holding via a stock listing and have sold further shares in the following years.

"As we seek to continue building on the club's history of success, the board has authorised a thorough evaluation of strategic alternatives," said executive co-chairmen and directors Avram Glazer and Joel Glazer.

"We will evaluate all options to ensure that we best serve our fans and that Manchester United maximises the significant growth opportunities available to the club today and in the future.

"Throughout this process we will remain fully focused on serving the best interests of our fans, shareholders, and various stakeholders."

The Glazer family have owned NFL side Tampa Bay Buccaneers since 1995 and Avram Glazer bought a team in the new United Arab Emirates Twenty20 cricket league in 2021.

Joel and Avram took over the day-to-day running of United after their father Malcolm suffered a stroke in April 2006. Billionaire Malcolm died aged 85 in 2014.

American investment firm Raine Group, who handled Chelsea's £4.25bn sale in May, is exclusively advising United. A consortium led by Todd Boehly paid £2.5bn for the Stamford Bridge club's shares, while saying it would provide £1.75bn to invest in the Premier League club.

The statement from the clubexternal-link added: "There can be no assurance that the review being undertaken will result in any transaction involving the company.

"Manchester United does not intend to make further announcements regarding the review unless and until the board has approved a specific transaction or other course of action requiring a formal announcement."

United, who are fifth in the Premier League, have not won the title since 2013 and have not won a trophy since claiming the Europa League and EFL Cup in 2017.

There have been multiple protests against the Glazers' ownership in recent years, including one in May 2021 that caused United's home league match against Liverpool to be postponed.

Thousands of supporters marched to Old Trafford in protest before the same fixture this season, in August.

He has since attended fans' forums in the wake of supporter unrest and pledged to make shares available to the club's followers.

According to Transfermarkt,external-link United have a net spend of 1.36bn euros (£1.18bn) on transfers under the Glazers, with only Manchester City having a higher figure in that period.

Portugal captain Cristiano Ronaldo, who left Manchester United with immediate effect on Tuesday, criticised the club ownership in a controversial interview last week - including saying the Glazer family "don't care about the club" on the sporting side.

A Bloomberg reportexternal-link in August 2022 said the Glazer family were willing to sell a minority stake in the club.

British billionaire Sir Jim Ratcliffe said he would be interested in buying United but then stated in October that the Glazer family had told him they did not want to sell.

View more on twitter'If the Glazers are to leave, most fans would welcome it' - analysis

There has never been any real dispute that the Glazers see Manchester United as a financial investment.

To a greater or lesser degree - co-chairmen Joel and Avram being the most invested - they are interested in the football side but the main aim is to make money, which they have succeeded at.

To that end, a few issues have conspired to make the Glazers think now is a good time to test the water with regard to an exit.

First, the European Super League plan was killed off. Whilst Barcelona, Juventus and Real Madrid are adamant it will get clearance through the courts, in its original form, it is done - and with it, the riches that would have come from it.

Then, Saudi Arabia's backing of Newcastle creates more competition within the Premier League and, eventually, Europe.

Added to the huge investment required on an Old Trafford refit - and improvements at the club's Carrington training ground - running a competitive United, in the short-term, is going to be very costly.

To that end, the £4.25bn Chelsea was sold for in the summer starts to look very attractive.

The Glazers have not been popular owners since the day they bought United in 2005.

If they are to leave, most fans would welcome it. However, given the likely selling price, their dream of ownership may be unrealistic.

And, even if a boyhood supporter fan Sir Jim Ratcliffe follows up his summer plan to attempt to buy the club, he is unlikely to be the only interested party. In the short-term, the future at Old Trafford may just bring more uncertainty.

The back page of the Manchester Evening News

All the latest Manchester United news, analysis and fan views in one placeYou can now get Man Utd news notifications in the BBC Sport app - find out morePodcast: The Devils' Advocate - listen to the latest episode on BBC Sounds