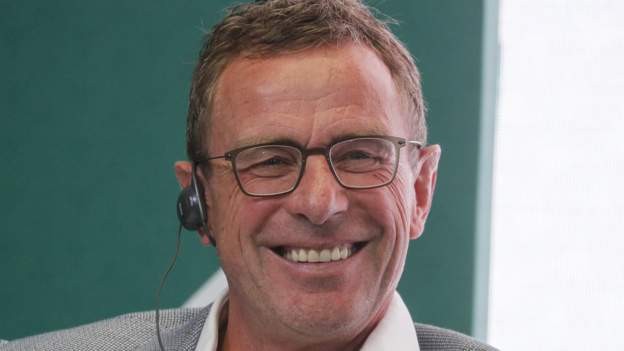 Rangnick led Schalke to the semi-finals of the Champions League

Manchester United are close to appointing Ralf Rangnick as interim manager on a six-month contract.

The 63-year-old German is poised to join United but will not be in charge this weekend against Chelsea while he waits for his work permit.

United have agreed terms with Rangnick, but not with Lokomotiv Moscow, where he is the head of sports and development.

Rangnick won the German Cup with Schalke in 2011 and took RB Leipzig to the final in 2019.

During the 2010-11 season he guided Schalke to the semi-finals of the Champions League, where they lost 6-1 on aggregate to United, who were then beaten by Barcelona in the final.

United are eighth in the Premier League and Solskjaer, who scored the winning goal in the 1999 Champions League final for the club, was dismissed following an embarrassing 4-1 loss at Watford on Saturday.

Since then, caretaker Michael Carrick, Solskjaer's assistant, took charge of United on Tuesday for the 2-0 win at Villarreal, a result that ensured they would finish top of their Champions League group.

Rangnick has built an impressive coaching reputation during his time in Germany, chiefly through spells at Stuttgart, Hannover, Hoffenheim, Schalke and RB Leipzig.

He was subsequently in charge of the Red Bull group of clubs and his current club Lokomotiv have a Europa League game against Lazio this evening and United are mindful of not disturbing their preparation.

Rangnick impressed during an initial conversation with United officials earlier this week.

However, he has held further discussions about his role beyond the end of the season.

Senior United figures believe Rangnick's expertise will be invaluable from a technical and structural perspective.

The move backs up the Old Trafford outfit's view that bringing in an interim manager to the end of the season will provide them with space to assess the managerial situation properly.

Mauricio Pochettino is known to be interested in the United job but the Premier League club are wary of getting into protracted discussions with PSG that could drag on for longer than they want.

It is understood Michael Carrick will remain in charge for Sunday's game against Chelsea at Stamford Bridge.