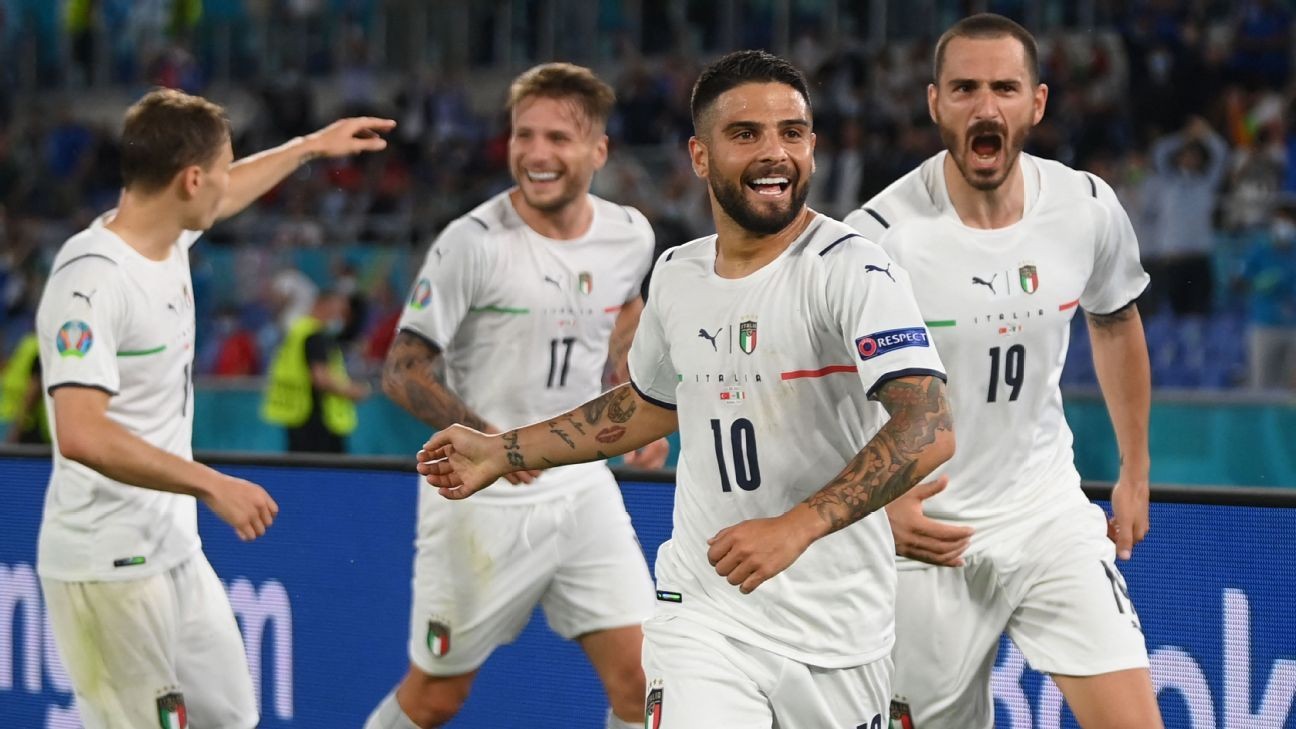 Aside from two very familiar faces in the centre of defence, this isn't the Italy we're all accustomed to. Manager Roberto Mancini had promised daring and risk-taking, as well as the traditional Italian football tropes of work ethic and patience. His team were true to their word in the opening game of Euro 2020, outlasting Turkey after a scoreless first half to win 3-0 -- the first time the Azzurri have ever scored three times in a European Championship game -- and extending their unbeaten streak to 26 games on an emotional night in Rome.

What this Italy side lack in A-list superstars in their prime, they make up for in belief and attitude. There was no stage fright on the night even playing in front of a home crowd, expected to be nearly 16,000 strong, that can go from fanatical support to vicious hyper-criticism in the space of 90 minutes.

Turkey boss Senol Gunes chose not to bolster the midfield by adding another defensive midfielder. Why would he? Nobody had conceded fewer goals than Turkey -- three, none of which from open play -- in the qualifying tournament. That, of course, was pre-pandemic. More recently, in the three World Cup qualifiers played in March, they had scored 10 goals (including four against the Netherlands and three against Norway). Like so many things in COVID times, it was hard to tell what you were going to get. Like the fine print on your 401(k) brochures, past performance is no guarantee of future results.

It was something Mancini had emphasised. Better to play your own game and let opponents worry about you than try to gain an edge. He lined Italy up in the 4-3-3 we've seen throughout his tenure, with centre-forward Ciro Immobile flanked by the tricky Lorenzo Insigne and Domenico Berardi, the surprise baller from provincial Sassuolo. Unlike most of his predecessors on the Azzurri bench, Mancini has been preaching a fun, carefree style. As if to reinforce this, at the back he chose Leonardo Spinazzola (who ordinarily plays as a wing-back) and Alessandro Florenzi (a recycled winger not known for his defending) as his full-backs. Between them were the hugely experienced Leonardo Bonucci and Giorgio Chiellini, two centre-backs with a combined age of 70. If Italy really were going to attack as much as they promised, they'd be defending further up the pitch anyway and wouldn't need to worry about the old legs at the back.

The Stadio Olimpico was less than a quarter full, but the crowd noise was powerful, both to viewers at home -- no computer-generated audio here -- and to the players on the pitch, the vast majority of whom had only known empty, echoing caverns for much of the past 15 months.

Italy had plenty of the ball in the first half, but the old fox Gunes's game plan thwarted much of the build-up play as Turkey sat deep and narrow. Chielini slipped away from his club teammate Merih Demiral and his header forced Ugurcan Cakir to deflect the ball over the crossbar. Other than a couple of Immobile strikes and a neat move that resulted in Insigne's shot being deflected wide, that was Italy's net return in the first half.

Euro 2020: Italy's opening win in Rome gave soccer fans the night they had been craving

Euro 2020 of kits! Every team's home and away jerseys ranked

There was a late talking point before half-time when Spinazzola's cross hit Zeki Celik's arm in the penalty area. Referee Danny Makkelie had a clear view and shook his head, while the Video Assistant Referees did their "silent check." It was the sort of incident that in some leagues -- like Serie A or La Liga -- might have been an automatic penalty last season, given that Celik's arm was away from his body. But UEFA head of referees Roberto Rosetti had been clear before the tournament, reminding referees to consider not just the position of the arm, but also the biomechanics of a player's movement and whether it was "natural" and "coordinated." Celik's looked both.

The precedent for handballs in this tournament has now been set. Will future decisions adhere to the same methodology? If not, fans -- not to mention players and managers -- will be pulling out their hair in short order.

Half-time came without Turkey having taken a single shot on goal. Gunes wouldn't have been happy with that, but another stat (in addition to the big goose eggs on the jumbotron) would have pleased him: Chiellini, the veteran defender not known for his skills on the ball, had completed more passes than anyone on the pitch, 54 in total. That meant the game plan was working: Turkey were denying space and all too happy to let Italy's weakest passer have the ball.

You sensed it might take an error to break the ice. It nearly happened in the 51st minute, when a mistake by Jorginho released Cengiz Under and his blistering pace on the counter, with nothing but green grass and Italy's hulking keeper Gianluigi Donnarumma ahead of him. A breathless recovery run from Spinazzola and Donnarumma's own near-post reflexes thwarted the danger.

Italy proved their growth under Roberto Mancini with a dominant win over Turkey in their Euro 2020 opener. MIKE HEWITT/POOL/AFP via Getty Images

The game-changing error came nearly two minutes later. Berardi's little shimmy down the right saw Umut Meras end up on his backside. Berardi whipped a vicious, mid-height cross and Demiral failed to get out of the way in time, deflecting the ball into his own net.

Goals change games ... and approaches. Turkey made two substitutions and, just as important, moved the team's centre of gravity further up the pitch. Italy capitalised almost immediately. Spinazzola's shot -- after some nifty ball movement -- forced a tremendous save from Cakir, but the ball fell for Immobile, who drove it home to make it 2-0 in the 66th minute.

The collective sigh of relief among Azzurri fans was palpable. Immobile -- a prolific scorer who has averaged more than 24 goals a season in Serie A in the past five years, but never quite set the national team alight -- had gotten off the mark. His suitability to play up front wouldn't be a talking point for the next few days. And, more importantly, this was Italy. At home and 2-0 up, never say never, but pedigree and history tell you that they don't drop points in these circumstances.

Besides, when the opposition is chasing the game, space magically opens up. Which is what happened 11 minutes from time as Italy, still pressing, won the ball back, and found an unmarked Insigne for one of his trademark curled finishes to make it three.

Make picks throughout the European Championship for a shot at $10,000.
Make Your Picks

"We played well, even in the first half, even though we didn't score," Mancini said at the final whistle. "The fans really lifted us, I think we can all be happy ... and I hope we have more nights like this one."

Indeed. The philosophical transformation he's been preaching withstood its toughest test thus far. Gifted players like Berardi, Spinazzola and Insigne -- all of whom have had their share of knocks in their careers -- proved that they deserve their manager's trust. So too did the much-maligned Immobile, who got a nasty monkey off his back. And even the ancient Chiellini-Bonucci partnership showed they have plenty in the tank -- at least when they play against a lone striker around their own age, like Burak Yilmaz.

It's a start, it's a single step, but that's how every long journey begins. Italy, a country that is only now recovering from the pandemic after being among the hardest hit in the western world, knows this all too well. Seeing their team begin like this, in the eternal city of Rome, as fans begin to return, is far from insignificant. Just ask Immobile.

"This win goes out to everyone everywhere who has been affected by this horrible disease and especially everyone who is still fighting this," he said. "We're all in this together."