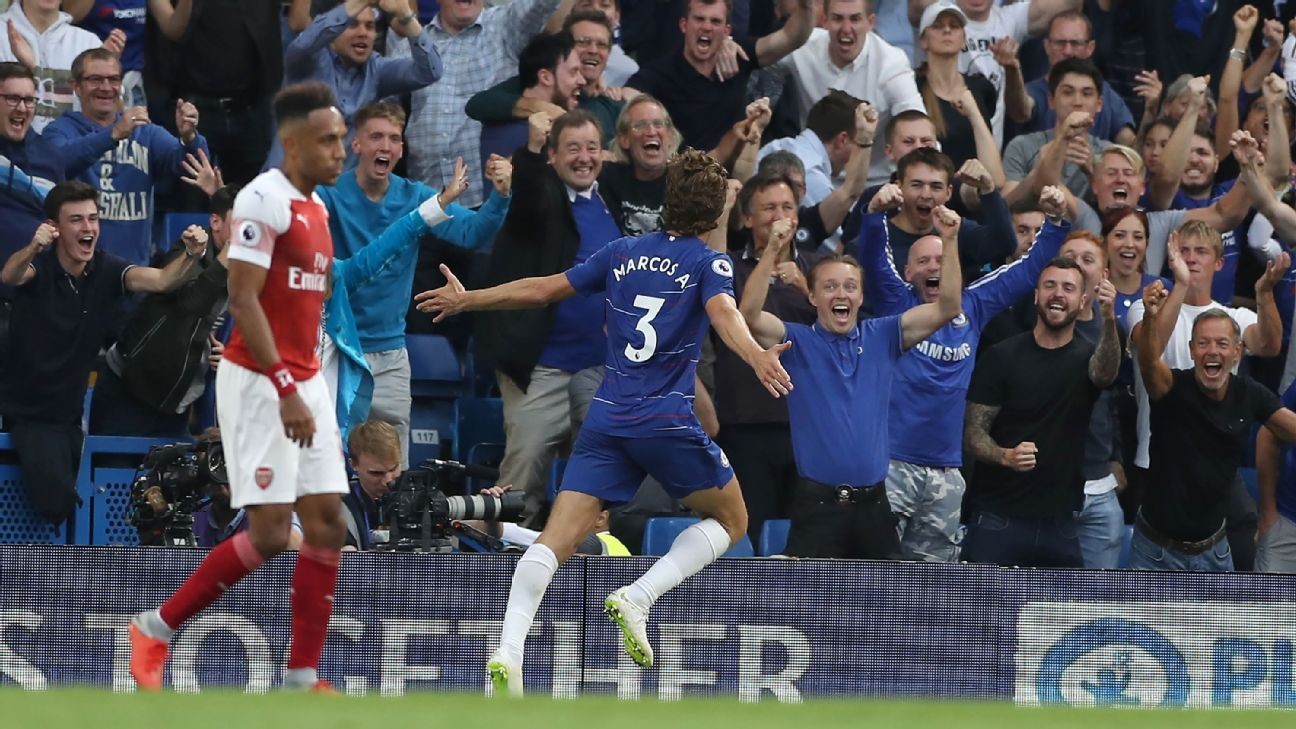 ESPN FC's Craig Burley breaks down the defensive struggles that plagued both Chelsea and Arsenal in a game littered with goals.

Craig Burley runs through the talking points from each of Saturday's Premier League matches, including Chelsea's win over Arsenal.

Chelsea edged Arsenal in a five-goal thriller to make it two wins out of two in the Premier League for new manager Maurizio Sarri. After giving up a 2-0 lead, the introduction of Eden Hazard as a substitute on the hour mark proved pivotal and the Belgium international set up a late winner for Marcos Alonso, who drove home the playmaker's fine cross.

The rejuvenation of Alvaro Morata caught the eye, as did the influence of Hazard on the outcome. Victory over Arsenal is always sweet for Chelsea supporters and these three points not only extend an unbeaten start to the campaign, but provide breathing space for Sarri to address defensive matters

Chelsea's inability to defend a two-goal lead bordered on embarrassing. Arsenal players repeatedly got to the touchline with ease on both flanks and picked out passes to unmarked teammates in the centre who, on more than one occasion, should have done better.

7 -- In his first press conference, Sarri said he wanted to bring an element of fun back to Stamford Bridge and he has certainly succeeded. The Italian deserves credit for persisting with Morata, who played extremely well in addition to scoring. On the flip side, the defence has yet to settle into the mechanics of Sarri-ball.

GK Kepa Arrizabalaga, 7 -- Got a hand to Henrikh Mkhitaryan's goalbound shot but couldn't keep it out and was let down by his defence when Alex Iwobi scored. That said, Chelsea's new No. 1 didn't look fazed by the fragile backline in front of him.

DF Cesar Azpilicueta, 8 -- Will be disappointed as captain by such disorderly defending, but made some telling blocks and tackles and delivered a wonderful ball for Morata to score; a moment reminiscent of the assist-goal relationship the duo enjoyed periodically last season.

DF Antonio Rudiger, 6 -- Looked uncharacteristically vulnerable and was caught square several times when Arsenal enjoyed their period of ascendancy in the first half. Settled more after the break and grew in confidence when Chelsea's midfield settled and afforded its backline more cover.

DF David Luiz, 5 -- Arguably the weak link at the back, he was guilty of some wayward distribution that put his side under pressure and struggled to cope with the inventiveness of Mkhitaryan.

DF Marcos Alonso, 9 -- This was the Alonso of the Conte wing-back era. Buccaneering runs down the flank saw him provide an assist for Pedro and ultimately score the winner himself. Alonso's new role as a full-back saw his defensive limitations exposed but, given the result came thanks to his efforts, they can be forgiven.

MF Jorginho, 7 -- For the opening 25 minutes, Jorginho was the conductor of Chelsea's Sarri-ball orchestra. However, there is a lightweight element to his play that saw him bundled off the ball on occasion, particularly when Arsenal realised they needed to quell his influence by getting tighter.

MF N'Golo Kante, 7 -- Once again playing in an advanced role, Kante found himself far enough up the pitch to be a goal threat. The flip side is that Chelsea lacked his presence in front of the defence when it was needed and were exposed as a result.

MF Ross Barkley, 7 -- Played Sarri's high-tempo passing game to perfection and had the physicality to push through when making forward runs. An slack pass resulted in Mkhitaryan's goal, but of more concern to Barkley would be that he was withdrawn in favour of new loan signing Mateo Kovacic on the hour.

FW Pedro, 8 -- Enjoying a new lease of life under Sarri, Pedro was a constant thorn in Arsenal's defence and made the space for himself to get into the right place to fire home Alonso's cross for Chelsea's opener.

FW Willian, 6 -- Was involved in plenty of pretty possession play early on but faded out of the game and was withdrawn in favour of Hazard on 61 minutes, a move by Sarri that would edge the game back into the home side's favour.

FW Alvaro Morata, 8 -- Whisper it quietly, but Chelsea have a new striker and his name is Alvaro Morata. Joking aside, he answered his critics by leading the forward line well and scoring; he might have had two but for some fine goalkeeping by Petr Cech,

MF Mateo Kovacic, 7 -- Impressive. Tigerish in the tackle, he showed a good touch on the ball and brought added robustness to Chelsea's midfield that had been lacking.

FW Eden Hazard, 8 -- There were groans when Hazard was only named among the substitutes, but they turned to cheers when he was finally introduced and immediately set about traumatising Arsenal's defence, with the inevitable consequence being his role in the winning goal.

FW Olivier Giroud, NR -- Replaced Morata for the final 15 minutes and Chelsea benefited from his physical presence on the pitch.