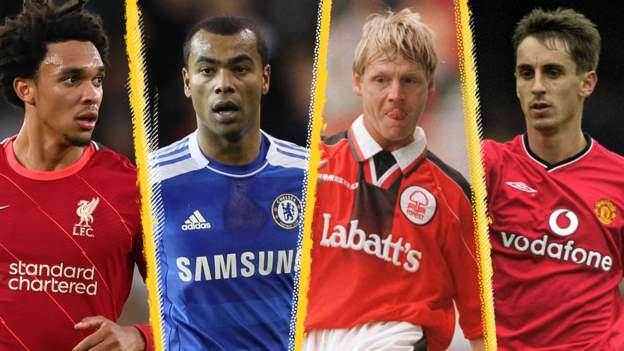 This week represents a landmark moment in the Match of the Day Top 10 podcast - Micah Richards has made it on to a list!

Yes, in the latest episode Gary Lineker, Alan Shearer and Richards himself are ranking the greatest Premier League full-backs.

As Lineker remarks, the role has changed significantly over time, but their list covers that evolution, from the old-school dogged defensive stalwarts to today's high-energy, flying wing-backs.

To hear how they made their final selections, make sure you listen to the podcast on BBC Sounds and you can rank yours at the bottom of the page too.

Listen to Match of the Day Top 10: Premier League 'ballers'

Richards came through the youth ranks at Manchester City and helped them to victory in the FA Cup in 2010-11 and their first Premier League title the season after. Predominantly a right-back, he suffered with injuries throughout his career, which hampered his time after City with Italian side Fiorentina and Aston Villa. In total, he played 204 Premier League games, scoring seven goals and providing 11 assists.

Richards: If I had stayed fit, I fancy myself against any of the others on this list, I really do. All-round, maybe not the modern-day full-back. But I didn't stay fit enough.

Shearer: Yeah, but for the injuries, Micah would have been right up there.

Richards: Football is all about timing. After the first Man City takeover with [Thaksin] Shinawatra, I was chopping and changing between centre-half and right-back. When I got to right-back I didn't know the position enough so I used my pace and strength to get myself out of trouble. Under [Roberto] Mancini, I played a vital part because I had learnt. But then I started getting injuries. I just wish I had more time to show what I could do. I feel I was robbed.

Signed for a mere £375,000 from Stoke, Dixon was a mainstay under George Graham and Arsene Wenger as part of the famous Arsenal back four, also including Nigel Winterburn, Tony Adams and Steve Bould. He won four English top-flight titles, two of them the Premier League with the Gunners, making 305 Premier League appearances in total. He scored nine goals and made 11 assists in those.

Lineker: Dixon started in the lower leagues - Burnley, Chester and Stoke, where Arsenal got him from - but he always played in that position and knew it well. And then obviously it would help to play in THAT famous Arsenal back four.

Shearer: The game has changed, but if you are looking for a defender that you could rely upon in that system then bingo. He was perfect.

The man affectionately known as "Psycho", Stuart Pearce made 202 Premier League appearances, during which he netted 20 times, many of them penalties and free-kicks. He spent the majority of his career with Nottingham Forest, but also had stints with Newcastle, West Ham, Manchester City and Coventry. He is best remembered for his exploits at left-back for England, which included missing a penalty in the 1990 World Cup semi-final shootout loss to West Germany and his redemptive penalty in the shootout win over Spain at Euro 96.

Lineker: What a fierce, fierce player he was. Quite a quiet man when I played with him back in 1990, he didn't say much. I think he has changed a bit on that front. He was tough, but he could play.

Shearer: As a top professional, there are not many better than him. He'd hate to let anyone know he was hurt. The penalty he scored in Euro 96 against Spain epitomised what Pearcey is all about. Having missed the size of penalty he missed in 1990, to then have the guts to say 'yeah, I'll have this one'.

French left-back Patrice Evra joined Manchester United from Monaco in 2006 and went on to play 273 times for the Red Devils in the Premier League. He would pick up five league titles in that time before leaving to join Juventus in 2015. He would return to the English top flight at the end of his career for five appearances during a short stint at West Ham.

Shearer: He was a brilliant player - quick, strong, he got up and down and was a part of that Manchester United team that were hugely successful.

Richards: Evra was class. He started badly, though. He played in a Manchester derby early in his career and had an absolute stinker. But the way he turned it around! He had so much energy. He could play in any era.

Lightening-quick right-back Walker made his name at Tottenham with 229 appearances and is now counting his medals at Manchester City as he closes in on 200 appearances for the club.

A winner of three Premier League titles, one FA Cup and four League Cups, the England player could have added international honours in the summer but agonisingly missing out on glory in the European Championship final against Italy.

Richards: People say "but if he didn't have pace...", but he does have pace and he knows how to use it. I know over the years he has made mistakes that people hang on to but look at his consistency, his improvement... and he has medals now.

Shearer: You see him recovering back and making tackles, even when people have two or three yards on him.

One half of Liverpool's current supreme full-back duo along with Trent Alexander-Arnold (more on him in a bit). Signed for a bargain £8m, Scotland skipper Robertson may go down as one of the best deals in Premier League history.

A provider of goals, the former Hull player has laid on 36 assists in the top-flight with the Reds, winning the Premier League title and the Champions League.

Lineker: We were sitting in a Match of the Day studio and watching Hull. It was two or three minutes in and Ian Wright said: "I really like this left-back they've got, this Robertson kid." He had an absolute shocker in this game and we were all laying into Wrighty. Since then Mr Wright has been proved right.

Sir Alex Ferguson once said that Denis Irwin was the only player guaranteed a spot in his all-time Manchester United XI. High praise indeed.

Equally adept at playing at right or left-back and possessing the ability to play with both feet, consistent Irwin played 296 Premier League games for United, winning seven league titles, scoring 18 goals and providing 23 assists. The Republic of Ireland international also played a major part in the club's Treble winning side in 1999.

Shearer: He was Mr Reliable, hardly ever missed games and scored goals. The £600,000 Manchester United paid for him from Oldham, talk about value for money. He paid that back and a few million more. He was always the quiet one in that Manchester United team, but he was like the silent assassin.

Lineker: He was just a really good footballer. A good passer of the ball. Intelligent. It was often hard to get praise out of Alan Hansen, but he said he thought Irwin was the best right-back in the Premier League. And the best left-back.

Eight Premier League titles and a mainstay for Manchester United during their most successful ever period. What Neville lacked in technique he made up for in heart.

A one-club man, Neville played 400 games for the Red Devils and was on the losing side just 57 times, and played on the opposite flank to team-mate Irwin.

Shearer: On the pitch, I think he was more reliable than spectacular, which is no bad thing for a defender. He was very, very good. He played in some good teams, with good players around him but he was good at what he had to do.

Richards: I wouldn't say, when I look at his game, that he was the best full-back, but it is his consistency that means he is this high up. And playing that many games for Manchester United and all that he won.

Is there a better full-back currently playing the game in world football? Liverpool academy product Alexander-Arnold has made that right-back position his own.

Working in tandem with Robertson, he has provided 35 assists in 134 top-flight games for the Reds, winning the league title in 2019-20.

Richards: He has transformed the role. You talk about Dani Alves over the past decade. Before then it was Cafu. Maicon had that little period. But I have never seen anything like what he provides in terms of quality into the box consistently.

Lineker: It is hard to imagine any other country in the world where he is not first pick. Why is he not first choice for England? Andrea Pirlo said the one thing missing from England is a Pirlo. I think Trent can be that. His passing range is extraordinary.

Richards: I think it's because you can trust Kyle Walker more defensively. The way we play is more defensive. So there is no role for him in the team. But we have to find one.

Shearer: We have never been as strong at right-back.

Lineker: I have watched a lot of tournaments and often England disappointed in those, but Ashley Cole always played well. He just arrived. It never fazed him. He was the one player who could play Cristiano Ronaldo.

Richards: If I had one criticism it is offensively. He could have had bigger numbers of goals and assists. But that is just the final piece. He was the best full-back we had during my time with England.

Shearer: This, for me, was my easiest topic to pick number one. Ashley Cole stands out on here more than anyone else for being a defender. He was the best at that. Very rarely anyone got past him, you couldn't rough him up because he was hard as nails. He was nasty, horrible at times. But one versus one, he was magnificent.

Pick the order you would rank these Premier League full-backs in.