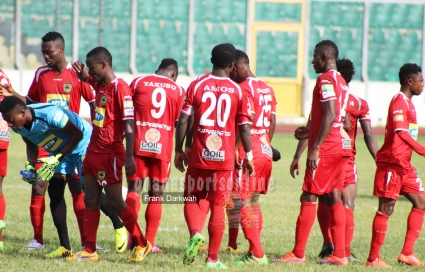 Kumasi Asante Kotoko will have to wait a little longer for their first win in six games after playing out a 1-1 draw with Aduana Stars in a nervy Ghana Premier League game in Kumasi on Wednesday.

The Dormaa-based side took a 1-0 lead into the break thanks to a Zakaria Mumuni strike.

In the second half, however, Frimpong Manso’s Kotoko came flying out of the traps and finally managed to break Aduana down when Abass Mohammed equalised with a delightful free kick.

Kotoko kept pushing for the equaliser but Aduana’s defence remained resolute to ensure the first half ended in their favour. However, three minutes into the second department, the Baba Yara stadium came to live as Abass Mohammed equalised for the home side with a delightful free kick.

The goal may have spurred Kotoko on as Emmanuel Gyamfi almost scored the second goal, denied by brilliant reflex save by Addo before referee William Agbovi waved away Abass penalty appeal.

Both sides nervously pushed for a winner but couldn’t find another break through as both sides shared the spoils.

Kotoko are without a win in six league games and have dropped to fifth on the table. Aduana are three points adrift leaders WAFA.