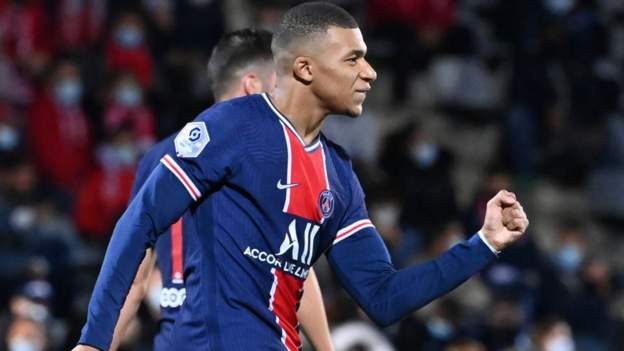 Kylian Mbappe scored twice as a much-changed Paris St-Germain side comfortably beat Nimes, who were down to 10 men for 78 minutes.

Mbappe rounded the keeper to slot it into an empty net in the first half before racing away to score his second to make it 3-0 to PSG.

Full-back Alessandro Florenzi scored with a close-range header after hitting the post twice.

And Spaniard Pablo Sarabia, who set up Florenzi, made it 4-0 late on.

Nimes defender Loick Landre was sent off for a reckless challenge on Rafinha after he caught him in the stomach with his studs in the 12th minute.

Midfielder Rafinha, who joined the French champions on a three-year deal from Barcelona this month, was impressive throughout and picked up an assist before being substituted in the second half.

It was a ruthless display by PSG, who dominated the game following the sending-off and had numerous chances to score - Mbappe came close with a headed effort, while Ander Herrera was denied from close range in the first half.

PSG were without key forward Neymar, who was left out of the squad after playing for Brazil - and scoring a hat-trick - in their World Cup qualifying win over Peru on Wednesday.

Everton striker Moise Kean, who joined PSG on loan until the end of the season, made his debut but was unable to get on the score sheet despite heading on to the crossbar late in the second half.

Lucas Deaux (Nîmes) wins a free kick in the defensive half.

Presnel Kimpembe (Paris Saint Germain) wins a free kick in the attacking half.

Moise Kean (Paris Saint Germain) hits the bar with a header from the centre of the box. Assisted by Pablo Sarabia with a cross.

Attempt blocked. Idrissa Gueye (Paris Saint Germain) left footed shot from the right side of the box is blocked.