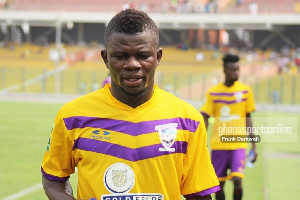 Medeama captain Kwasi Donsu has revealed the inspiration behind his side win over Legon Cities in matchday 1 of the Ghana Premier League campaign.

The Yellow and Mauves started the 2022/23 campaign with an away win over Legon Cities at the El-Wak Stadium on Sunday.

A second half strike from Kofi Asmah was all the Tarkwa-based club needed to grab the three points of the of the campaign after a spirited second half performance.

After the game, the enterprising midfielder disclosed his side were determined to change the narrative against the Royals having suffered a 3-1 defeat last season at the same venue.

“It wasn’t an easy game based on the fact that it was a season opener, we went into the game with the idea of picking all points at stake, we were determined to win and it paid off for us” he told Seth Kojo Amoah Mayanga of Sunyani-based Union FM.

“Last season, we lost 3-1 to Legon Cities at their home grounds, so going into this game we were poised to change the narrative and with determination we were able to win”

“For the past weeks, David Duncan has been with us at training but I can say he wasn’t much involved in our training activities. So, it is a collaborative effort from both Duncan and his assistant Umar Rabi that helped us to win”