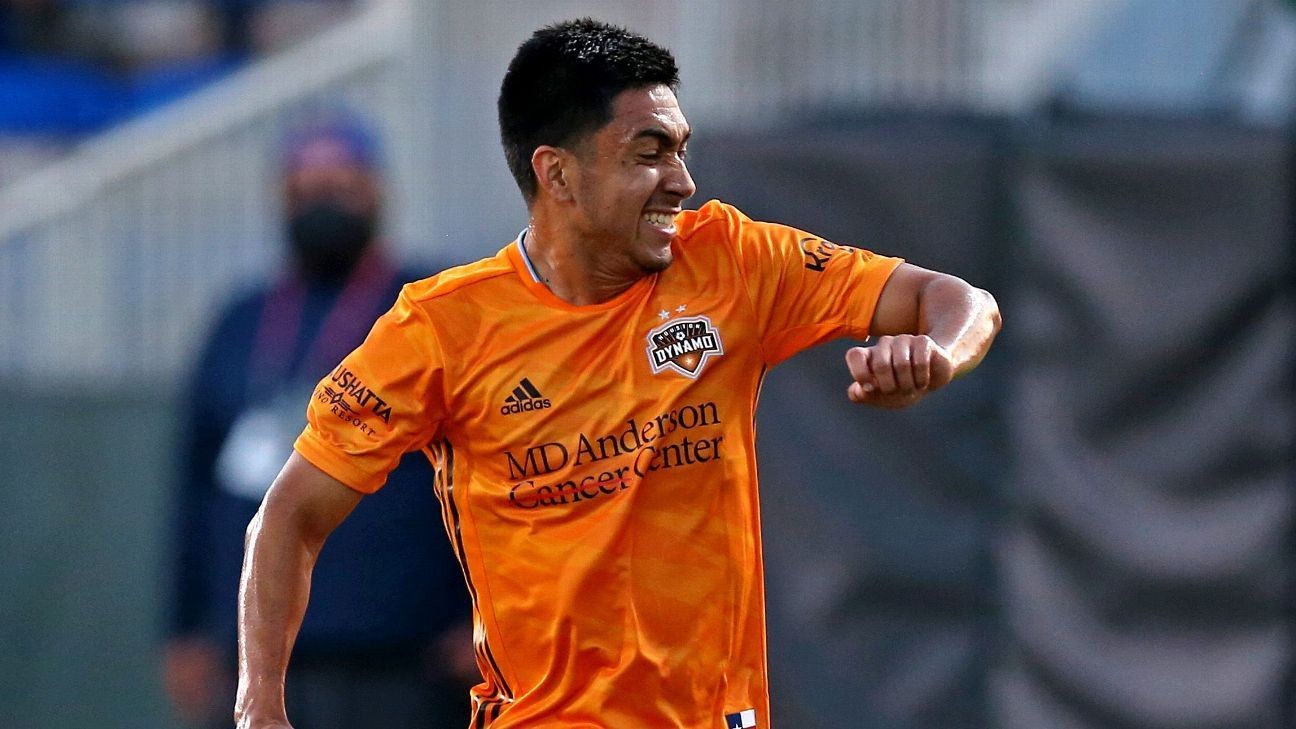 Tab Ramos and Memo Rodriguez hit it off from the very beginning. It was last October when Ramos had just been hired as the Houston Dynamo's manager, and with the team's season having just concluded, Rodriguez was in the process of getting in a set of postseason workouts. Rodriguez swung by his new boss's office and they got to talking about where the El Campo, Texas native best fit into Ramos's system.

Rodriguez had grown up as a central midfielder, but he'd spent the bulk of his professional career on the wing. Ramos thought a return to a more central role as a two-way midfielder suited the 24-year-old best, a fan of Rodriguez's technical ability, physicality and endurance. The player agreed.

The early returns on the season have showed been promising. Rodriguez has been deployed mostly on the left side of Ramos' central midfield trio, and his two-goal performance in a 3-3 draw with LAFC showed off his ability to augment the team's attack behind mainstays Alberth Elis and Mauro Manotas. Rodriguez found the going a little tougher in his side's subsequent games, but his seven goals and five assists in just under 1,400 minutes of playing time last season hint at his ability to produce when given the chance.

"I think we just need to keep developing [Rodriguez] at both ends of the field," said Ramos. "On the tactical side, make sure that he gets into the box hard to make plays for us and to score goals like he did in the first game [at MLS is Back]. And then on the physical side, having the stamina to get that high speed running in, not just jogging and covering ground but actually going in and winning balls because I know that he can. We're a work in progress, but Memo is definitely an important player for us."

Rodriguez's performances also saw him join a growing number of U.S.-born players that are taking on more important attacking roles, a group that includes the Philadelphia Union's Brenden Aaronson, Orlando City's Chris Mueller and Toronto FC's Ayo Akinola. While MLS remains a league whose teams won't hesitate to open the checkbook for attackers from abroad, Rodriguez is sensing a shift of which he intends to take advantage.

"I think it's a huge responsibility on my shoulders, but I always play with a chip on my shoulder," he said about his role in Houston's attack. "Every game I have to prove that I'm a player that can play in this league and have the qualities. I mean, those guys, the foreigners, obviously they're fantastic players, but why can't a homegrown or a special talent coming up the ranks be that player? So I'm just trying to do everything I can and develop every game to help the team."

After years out wide, Memo Rodriguez has found a home in the center of Houston's midfield. Peter Casey-USA TODAY Sports

Talk to Rodriguez for any length of time, and he's quick to dedicate any success that he has -- including the two goals against LAFC -- to his mother, Velia. That by itself isn't all that unusual. Parents are often one of the drivers of a professional player's success, but in this case, the bond between mother and son is even stronger than it otherwise might be.

Rodriguez's father, Guillermo Sr., was killed in a car accident just before Memo was born. His mother soon remarried and Rodriguez's step father, Jesus Acosta, has been a steady presence in his life. Yet Velia was determined to do anything she could to ensure Memo's success, which included driving him more than an hour each way to Houston so he could train with his club team, the Houstonians, and later, the Dynamo's academy.

MLS Power Rankings: What happened to LAFC and Atlanta?

How MLS players came to boycott, their reaction to Hansen's tone-deaf comments and how they'll move forward

In a household bursting with Memo and his three younger brothers, the effort Velia put toward her oldest son raised the usual howls of protest from his siblings. Memo admits they still echo to this day, even if they're less frequent.

"My younger brothers are older now, and they sometimes still ask, 'Why Memo and why this?'" Rodriguez said. "But they understand my mom had to make a sacrifice and she didn't know if I was gonna make it or not. But I was doing everything possible to show my brothers that you can do anything in life if you put hard work into it. I think they understand now."

When Rodriguez signed with the Dynamo as a homegrown player in 2014, it seemed the dreams of the player and his family had been realized, and that he would soon be part of Houston's first team. But reality soon took hold. Rodriguez was loaned to the Charleston Battery in 2015 in a bid to get more playing time. The coaching staff back in Houston had Rodriguez pegged as a holding midfielder, but Charleston manager Mike Anhaeuser soon noticed the player's skill on the attacking side of the game.

"It's difficult when you're that young to know if you can play that spot. He wasn't an Osvaldo Alonso, let me tell you that," said Anhaeuser, who managed Alonso (now in Minnesota after over a decade in Seattle) when he was in the USL. "But after about three, four weeks, we really kind of moved him into more of an attacking role. Watch his runs out of the midfield. That's what I saw, that he has a little bit of a forward instinct. You're not really a defensive midfielder if you're making really good runs into the box."

As for the possibility of Rodriguez sulking at being sent to the USL, Anhaeuser said, "No chance. [Rodriguez] was very dedicated and a hard worker."

But despite a solid stint in Charleston that saw him make 17 appearances, Houston waived Rodriguez prior to the following season. Fortunately Houston had just started an affiliate team -- the Rio Grande Valley FC Toros -- in what is now the USL Championship, and Rodriguez was offered a spot there to gain some experience. It wouldn't have been unusual for a once highly touted prospect to look at his situation negatively, but Rodriguez looked at as an opportunity.

"I didn't hesitate," he said about moving to Rio Grande Valley. "I wanted to show everybody that I have the work ethic, that I have the quality to play in MLS, and I had to go down there and prove myself."

He did just that, scoring six goals in 31 appearances in a wide midfield role. It helped that Rodriguez played under Wilmer Cabrera, a coach with extensive experience developing young players, including a stint with the U.S. U17 national team. It was Cabrera who helped Rodriguez rebuild -- and, in some respects, build up -- his game. And when Cabrera became the Dynamo's manager, he took Rodriguez back up with him.

"I was always a player that liked to go at people, but I think I hesitated at times," said Rodriguez. "At [Rio Grande Valley], scoring goals and getting minutes under my belt, playing a full season was great for me and I think it's giving me the confidence even now that Tab has given me that freedom in the attacking third."

In the process, Rodriguez become yet another example of how a stint in the USL need not be a trip to purgatory, and that it can instead be used as a springboard to greater things. That path left an impression on Ramos, who following his stint with the U.S. U20 national team is well aware of the challenges young players face in MLS.

"We live in a world where the 18- to 22-year-olds feel like they need to get rewarded so quickly," said Ramos. "And for them to go play a season in the USL, sometimes it feels like it's going backwards. It's almost like they feel like they don't deserve that. And they don't see it as part of a plan for getting better and for getting games and for getting experience. I think Memo likely understood that well, that he needed to go there because he needed games, and he needed to do well, and he needed to be the best there before he came to the first team. And so I think it's a great example for the other homegrown players."

Rodriguez has enjoyed a steady rise ever since. His apparent breakout season last year was interrupted by a hamstring injury, but he's intent on making the most of his chances in a new role.

With Ramos by his side, Rodriguez's odds of success have never been better.