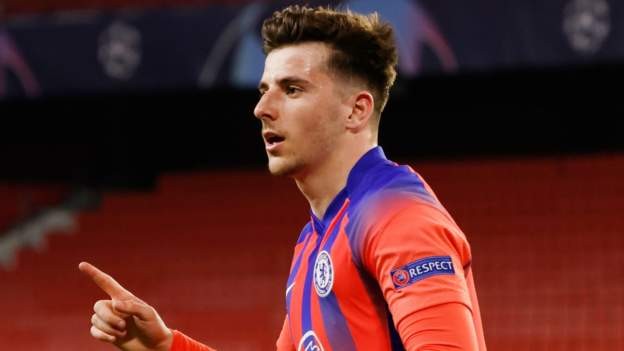 Mount set the Blues on their way to victory over Porto, with Ben Chilwell adding a second to give Chelsea a 2-0 first-leg lead.

England midfielder Mount, 22, has scored three goals in his past four games for club and country.

"The finish was clinical and excellent from Mason," said Chelsea boss Tuchel.

Chelsea bounce back to beat Porto

Mount's clever turn and finish in the first half helped bring some welcome relief to Tuchel after his side's heavy defeat to West Brom on Saturday, which was followed by a training ground incident between team-mates Kepa Arrizabalaga and Antonio Rudiger.

With both legs of this tie in Spain at Sevilla's Ramon Sanchez Pizjuan Stadium because of coronavirus travel restrictions between Portugal and the UK, this was Porto's 'home' game, meaning Chelsea's two away goals put them in pole position before next Tuesday's second leg.

Since Tuchel was appointed in January, Mount has scored more goals in all competitions than any other Chelsea player (5).

At 22 years and 87 days, he also became Chelsea's youngest ever goalscorer in a Champions League knockout match.

"He has the quality to do this and to do it in a quarter-final is a big step for him and a big help for the team," added Tuchel.

"It came in a moment after which we had suffered a lot - the team was too tense. We lacked the freedom. Our game was a bit static."

Mount was recalled to the starting line-up after the defeat by West Brom.

"I'm always working on my finishing, it's a part of my game I can improve on," he said. "I'm very happy to score and it's important to win."

'Mount is one of the best around'

Mason Mount is a player full of confidence at the moment. It wasn't even one of his best performances, but the things he did when he was on the ball showed the quality he has.

You look at the player who is going to spark Chelsea and it's Mount every time.

People used to say he's only in the side because he was one of Frank Lampard's favourites but no, he's in the Chelsea team and England squad because he's one of the best players around.