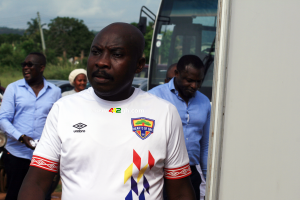 Hearts of Oak Public Relations Officer, Kwame Opare Addo is optimistic his side will beat Dreams FC in the semi-final of the 2021/22 MTN FA Cup.

The Phobians will welcome the Still Believe lads to the Accra Sports stadium on Saturday May 14, with the aim of reaching back to back finals for the first since achieving the feat in 1999 and 2000.

Samuel Boadu is yet to lose  an MTN FA Cup game since being appointed as Hearts of Oak coach last season.

"We are equally preparing to meet them. We are hoping for a good game and a good result," Opare Addo told CTV.

"We are preparing and we know it's not going to be an easy game because we know Dreams FC will come better prepared than we met some few weeks ago."

The other semi final clash between 2015/16 champions Bechem United and two-time Premier League winners Aduana Stars will be played on Sunday, May 15, 2022 at the Golden city Park in Berekum.