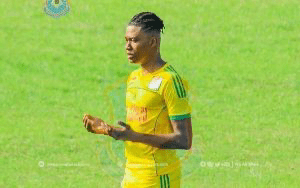 Muhammed Abdulahi is eyeing a top-four finish with his new club Wa All Stars in the 2019/20 Ghana Premier League season.

Abdulahi penned a two-year deal with the former Ghana Premier League champions ahead of the new season and has set sights on helping the club secure a top-four finish.

"With the squad we have especially having the experienced Fatawu Dauda in the post, It’s a major boost for the team. We have a very young and talented squad, we understand each other and stick together as a unit so we are like one big family and we are coming out to show what we have in us," Muhammed Abdulahi said in an interview with Ghanacrusader.com.

"Finishing in the top-four is one of our main motive this season as well as clinching the trophy we won in 2016 so we are seriously working towards it to make sure our goals are achieved at the end of the season," he ended.

Wa All-Stars will their open their league campaign with an away trip to Carl Reindolf Park to play Liberty Professionals.