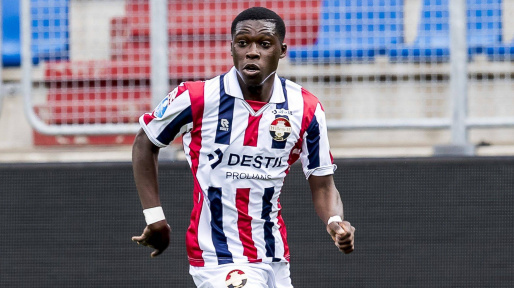 Willem II defender Derrick Kohn is experiencing a difficult season: he is the first to admit this. A candid story about the fear of failure, the lessons of the street, and the relationship with his brother.

Derrick Kohn joins in a bit confused. He and his teammates have just completed a training session of one and a half hours, but the 22-year-old is still not sure what exactly happened to him. “We started in the snow, then it was suddenly sunny and quite warm, then it hailed hard and we ended in the rain.” He shakes his head in disbelief. "It was crazy."

In a week in which Mother Nature showed her most fickle side, Willem II prepared for the crucial game against Heracles Almelo. In a way, the changeable weather symbolizes the achievements of the Tilburgers and of Kohn himself: it goes in all directions. The defender can agree with that comparison-with-a-wink. “That is quite correct, yes. Up and down. ”

It takes some getting used to for Kohn (who came over from Bayern Munich's second team this summer), fighting against relegation. In Germany, he was used to be better than his opponent every week and could attack to his heart's content. “Now everything is different”, Kohn sighs. "I have to learn to mainly defend. I can't just run forward and have to look around much better than I used to."

That is a matter of trial and error. “I played really well in the preparation. I came in with confidence. But the more you lose, the lower that self-confidence gets. I started to play less and less well, I really wondered a few times what the hell was wrong with me. I can remember one more match. Sparta home...That was really bad. I was afraid of making mistakes and I did not dare to be myself. The performance made me insecure, yes. Absolutely."

In difficult times there is always one person who Kohn can turn to. “My brother Michael is my support and refuge. He is five years older than me, but he is my best friend. If there is anything, I will call him. ” The two brothers learned to play football together, on the streets of Hamburg. “I always wanted to play with Michael and his friends in the squares so badly, but he didn't allow that. "Go to your own friends, you are too small," he would say. But the great thing was: the big boys were always watching the little ones' parties. To scout, actually. The best little ones were then chosen to still participate with the big boys."

And so it regularly happened that small (and very talented) Kohn was allowed to participate with the big boys. It was a hard learning experience. “We played tournaments, four against four. The winning team was allowed to stay, the loser had to leave the field and was replaced by another team. But there were so many children that after a defeat you were soon waiting for a few hours. And when it was almost your turn again, it was almost dark and you were called in by your mother. I have seen days when I was on the street for six hours, but only played one game, haha. So you had to win. ”

From those years on, Michael and Derrick have been inseparable. The bond only gets closer when the current Willem II player is scouted at a young age. , I went from my amateur club to a higher level, but there was one problem: my new club was a lot further from our house. So I had to be taken to training every day. My mom and dad didn't have time, so Michael had to do that. As a result, he could no longer go to his own training sessions and he had to stop playing football. He also dreamed of a great career, but he gave up that dream for me. I am still grateful to him for that every day."

With that in mind, Kohn tries to get the best out of himself every day. And, to his own regret, he has to conclude: that has not always been successful this season. “The people here haven't seen the real Derrick yet. Yes, a little while in the preparation, but that is not enough. I've also had a lot of bad moments. After some matches, such as against Sparta, I would prefer to say to all people in Tilburg personally: "This is not me, really not. I am better than this. ” Fortunately, things have improved in recent weeks. Not just with me, but with the whole team. And if we eventually stay in the Eredivisie, I will forget about all those bad matches."