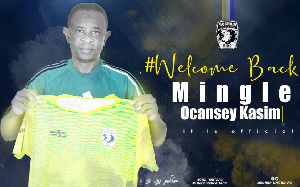 Head coach of Bechem United Kasim Ocansey Mingle has expressed displeasure about the performance of his players following their defeat to Asante Kotoko on Wednesday evening.

The Porcupine Warriors inflicted a 4-0 win over the Hunters at the Obuasi Len Clay stadium in an outstanding Ghana Premier League encounter.

Goals from Abdul Ganiyu, Fabio Gama, Andy Kumi Francis and new boy Michael Vinicius were enough for the Kumasi based club to pick all three points at stake.

Speaking after the game, the coach indicated his players did not have the confidence to win.

“They did not have the confidence to win, they all flopped but I can’t tell unless we go back to the dressing room and find out”

“Though we’ve lost but that will not deter us because it is an outstanding match so we are going to play our second game in the second round. We will put the defeat behind us and prepare for the rest of the matches ahead of us” he added.