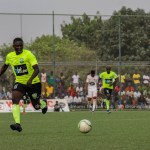 Dreams FC attacker Adam Saad has revealed that his target for this season is to score 10 goals for his club.

The attacker was moved up to the first team from the academy at the start of the campaign after impressing the technical team.

He has played 2 of the 12 games played so far in the league but the player wants to get some goals to boost his confidence.

“It felt great,playing my first game for the senior side was a dream come through moment for me. I was hoping for the opportunity and was very confident of myself and was just ready to deliver, though I did not play to my own satisfaction it was a great feeling and I am looking forward to more matches," he revealed.

He added: “I know I can offer more so I am not impressed with my performance so far but the coaches keep building my confidence and encourage me not to panic whenever I am on the field, So with time I believe my first team stay will be a successful one."

"My target is to help the team with 10 goals at the end of the season, so far I have played two games and believe I will soon find my scoring boots and announce my presence”.