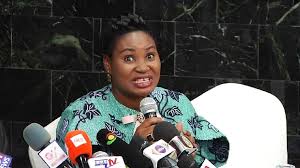 She was the lead legal brain of the former NC and received lots of plaudits for her role in the run up to the GFA elections.

Following widespread public commendations for her role in the operations of the NC, sources within the FA indicate Naa Odofoley has already began working on some legal matters involving the Footall Association and other parties.

It is believed that she will be appointed in the coming days.

The Ghana Football Association has started forming committees to steer the affairs of its activities, and the legal committee is seen as a strategic committee as the FA seeks to revamp its operations and relationships with third parties.