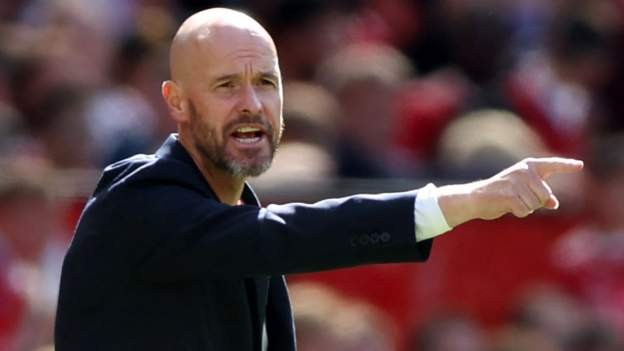 I am really happy Ronaldo is here - Ten Hag

Erik ten Hag says it is time for Manchester United to look forward and not reflect on what has gone wrong in recent seasons at Old Trafford.

Ten Hag is the fifth permanent boss since Sir Alex Ferguson retired, with only Louis van Gaal and Jose Mourinho winning a trophy.

United ended last season in a desperate state, losing 4-0 to Brighton - who they face on Sunday in their league opener - in their penultimate match.

"You cannot change the past," he said.

"You can only change the future. Now you have to look forward."

Not that Ten Hag expects life to be easy as the former Ajax coach gets used to his new surroundings.

While one new signing, Lisandro Martinez, looks certain to start and Christian Eriksen is likely to make his debut, Ten Hag knows there is still work to do on his squad.

The pursuit of Barcelona's Frenkie de Jong continues, even if complications around completing a deal, which now include Chelsea's interest in addition to the midfielder's contractual wranglings with the Catalans, make a successful conclusion anything but certain.

Ten Hag is also looking at offensive options, given Anthony Martial's absence from the Brighton game with a hamstring injury may trigger the selection of Cristiano Ronaldo, even though the 37-year-old has played for only 45 minutes during pre-season.

"There will be setbacks and disappointments," he said.

"In the end if you have a good plan, you will achieve success. I am 100% convinced of that."

The final games of last season were scarred by repeated protests against the club's owners and ill-feeling has not changed, even though there is now optimism that the start of a Fan Share Scheme is not far away.

Ten Hag wants his players on the pitch to be unified with those who follow the club's fortunes off it. And, that means implementing a more dynamic style he thinks is more in keeping with United's traditions.

"You want to win and to win in a certain way. That is the culture of Manchester United," he said.

"The stadium is meant to bring over a fight and good co-operation. We have to set an example on the pitch. We must have the right attitude.

"The attitude means hard work, be brave, bring in the convincement. The fans will like it. That will bring the fight back."