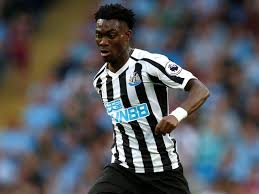 Newcastle United will continue their premier this weekend for a traditional 3.00pm kick-off on Saturday without winger Christian Atsu, when they go to Carrow Road to face newly-promoted Norwich City.

The magpies lost their opener match against Arsenal and hope to gain all 3 points against Norwich City.

Atsu joined Newcastle on loan in May 2017 from Chelsea.