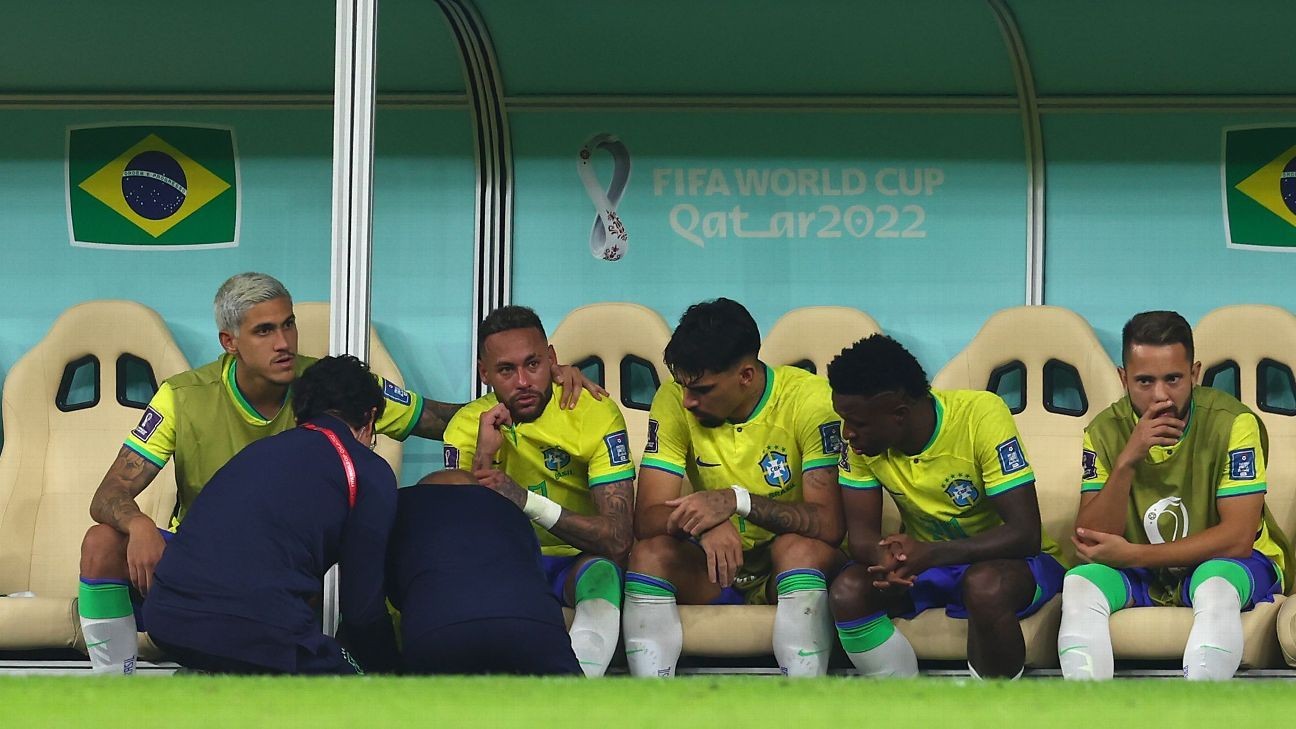 LUSAIL, Qatar -- Neymar was pictured in tears on the Brazil bench after leaving his team's 2-0 win over Serbia to begin their World Cup campaign in Qatar on Thursday, after picking up an injury to his right ankle.

Brazil, who are seeking a sixth World Cup trophy, will now have to wait between 24 and 48 hours to find out whether Neymar will play again at this year's tournament, said team doctors.

- Marcotti: Richarlison's goal of tournament bid lead's irresistible Brazil
- 2022 World Cup: How every team can reach the round of 16

Neymar was at the heart of an electric attack for Brazil as Tottenham striker Richarlison scored twice -- including a stunning second -- but the Selecao will now face a nervous few days as they await more news on the fitness of their star player.

The Brazil forward was subjected to nine fouls throughout the game by a physical Serbian side and was replaced by Antony in the 80th minute after spending some time on the ground at the Lusail Iconic Stadium following a hard tackle by Nikola Milenkovic.

Neymar was treated with ice packs by team trainers on the bench and was seen limping toward the Brazil locker room after the win.

In a statement to the media at the end of the game, Brazil team doctor Rodrigo Lasmar said it is still too early to judge how serious Neymar's injury is.

"Neymar has an injury on his right ankle, a direct trauma," Lasmar said. "Due to the impact from the knee of the Serbian player, we started immediate treatment on the bench.

"He continues with the physio, but now need to wait 24 to 48 hours for a better assessment. There is no MRI scan scheduled, but tomorrow we will make a new assessment. We need to wait and cannot make any premature comments.

"He felt this pain throughout the game, but chose to stay on the pitch to help his team for 11 minutes after his injury. It's remarkable that he did this."

Brazil team trainers speak with Neymar after he left their World Cup game against Serbia in Qatar. Getty Images

When asked whether he had a replacement in mind, however, Brazil coach Tite said he still believed Neymar would play again in Qatar.

"He stayed for the two goals we scored even feeling his ankle injury because the team needed him," Tite said after the match. "In the two chances and the chance he was in, which [was decisive], his ability to overcome pain. In both goals he was already feeling it.

Later, Neymar posted a message on his Twitter account without any reference to his status or the injury.

"Tough game but it's very important to get the win. Congrats team, first step done...6 more to go", Neymar posted.

The 30-year-old was visibly distressed when he walked to the substitutes' bench and appeared to be in tears before covering his face with his shirt.

Although no definitive prognosis has yet been made on the extent of his injury, the anxious wait for a diagnosis is a reminder of the injury that forced Neymar out of Brazil 2014, when a fractured vertebra after a challenge by Colombia's Camilo Zuniga ended his competition at the quarterfinal stage.

There is also concern among Neymar's teammates over his fitness, with Antony saying: "It's a worry, right? But we don't know what happened yet. We know how important he is, as the star he is."

"The most important thing for us it to have him at 100% for the next match,'' Richarlison said.

Neymar has yet to win a major title with the national team, although he did help Brazil win the 2013 Confederations Cup and their first Olympic gold medal at the 2016 Rio de Janeiro Games.

With 75 goals for the national team, he is two shy of Pele's scoring record.

Information from The Associated Press was used in this story.