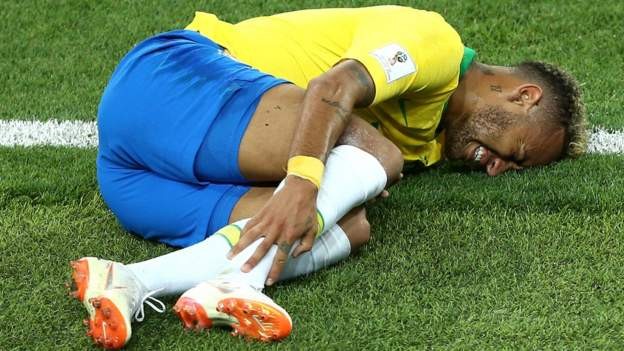 Neymar appeared to be in tears on the bench at the end of Brazil's opening World Cup win over Serbia after being substituted with a sprained ankle.

Brazil's team doctor confirmed the forward suffered the injury and that it will be reassessed on Friday.

The 30-year-old was replaced in the 80th minute of Thursday's 2-0 win after a heavy tackle from Nikola Milenkovic.

He sat with his face covered while receiving treatment and pictures showed his right ankle was heavily swollen.

"Tomorrow [Friday] we will have a new assessment," said team doctor Rodrigo Lasmar. "Now we need to wait, we cannot make premature comments."

The Selecao face Switzerland in their second Group G game on Monday (16:00 GMT).

The Paris St-Germain striker has suffered a number of injury problems with his right foot over the past few years.

Neymar was fouled nine times during the game, drawing four more free-kicks than any other player at this year's World Cup so far.