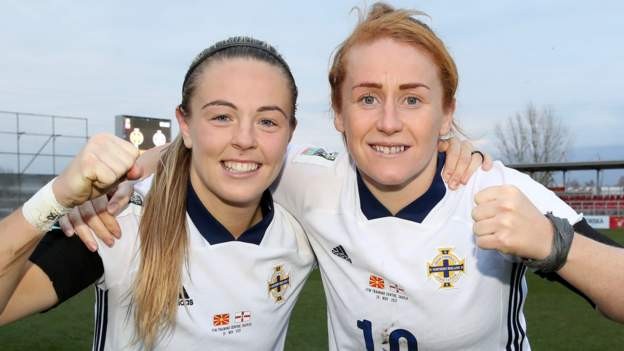 Northern Ireland celebrate after their record win in North Macedonia

Kenny Shiels demanded a statement. A statement is what he got.

Northern Ireland put 11 past North Macedonia in a record-breaking victory in Skopje, which surpassed their previous biggest win - an 8-0 victory over Taiwan in 2017.

Not only that, but Rachel Furness, with a well-taken hat-trick, joined David Healy on 36 goals for Northern Ireland to claim her own slice of history.

Even in years gone by, they would have been expected to beat a side like North Macedonia, who are ranked 131st in the world. However, what is vastly different to the past is the manner in which they achieved it.

It was a ruthless and calculated showing which ripped the heart out of the minnows with four goals in the space of 12 devastating first-half minutes. If it was boxing the referee would have started the count long before the half-time whistle.

Manager Shiels, who dedicated the victory to George Best on the 16th anniversary of his death, said past heavy defeats at the hands of bigger nations spurred his players on.

"You could see the immense intensity and how they wanted it so much all week. Their hearts were dancing in their eyes.

"They can't wait to get at it, we curb it and influence it. We had to make sure it was calculated and I think we controlled it really well today.

"You can't feel sorry [for North Macedonia] because these girls have been through this and we are now delivering that to this team. I'm delighted for the girls and their jubilation is fantastic to see."

Of course, games against North Macedonia come with the caveat that they are a relatively small football nation, but Northern Ireland could only beat what was in front of them and they finished the job with conviction.

Furness alleviated any nerves on four minutes and from there it was an onslaught, with Rebecca McKenna, Simone Magill, Lauren Wade and Kristy McGuinness joining in the seven-goal fun before the break.

Even towards the end, with three points already on the plane home back to Belfast, the pressing and intensity led to two strikes in injury-time - a fourth for Magill and Rebecca Holloway's maiden international goal.

It could have been even better if Furness converted her second penalty attempt, or if Marissa Callaghan and Wade's efforts dipped under the bar instead of onto it. If the tempo didn't naturally drop then, in all honesty, it could have been closer to 20.

Austria and England, who admittedly were sloppy in front of goal, hit North Macedonia for six and eight respectively but neither could breach double-figure mark.

It was a statement of intent that we had yet to witness from Shiels' side.

'We really expressed ourselves'

In the past, Northern Ireland were often reliant on Magill and Furness for goals, but in this campaign 10 players have netted across the five matches.

Even in the first games against Luxembourg and Latvia, two 4-0 wins, they were excellent but left a plethora of chances out on the pitch.

The two games against England and Austria showcased Northern Ireland's heart against bigger nations, but Thursday felt different, like further progress had been made by this rapidly-improving side.

Magill, who looked back to her best after a spell on the sidelines, praised her team's "clinical and ruthless" approach.

"These are the games you love and enjoy as a player. Getting on the ball, linking up, it's great and we really expressed ourselves today," she added.

"We have spent years on the receiving end of that and we know how it feels. Goal difference is vitally important in this campaign and we were clinical today."

It is unlikely North Macedonia were looking forward to their trip to Belfast on Monday, but even less so after this hammering.

On the other hand, back in front of a packed Seaview, which is sold out for the second home game in a row, Northern Ireland will have the Green and White Army to cheer them on for the final time in a year which will live long in the memory.

Having joined second-placed Austria on 10 points - two behind leaders England - Shiels and his players can look forward to Monday before the biggest year of their lives and the Euro 2022 finals next summer.