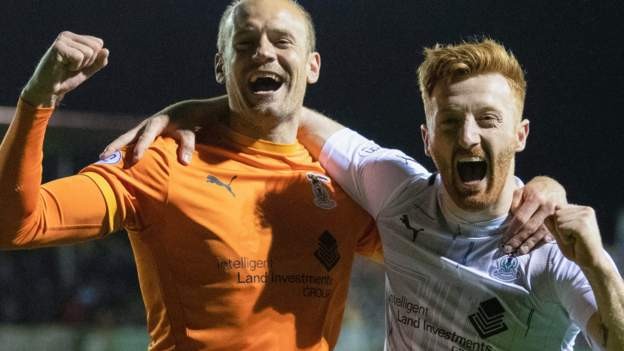 Inverness Caledonian Thistle will face St Johnstone in the Scottish Premiership play-off final after a 5-3 penalty shootout win over Arbroath.

The part-time hosts' dream of promotion to the top flight ended, despite Inverness finishing the second of two goalless legs with nine men after Danny Devine and Wallace Duffy were controversially sent off.

The tie ultimately went to a shootout and, after Arbroath veteran Bobby Linn had his spot-kick saved by Mark Ridgers, Kirk Broadfoot slotted home.

Inverness, who have spent four years in the Championship, will now host St Johnstone on 20 May before travelling to Perth for the return leg three days later.

It was perhaps no surprise that goals were difficult to come by at Gayfield considering Inverness had scored just four times in their five previous meetings this season and Arbroath only one.

Billy Dodds' side finished a place below their hosts in the Championship but had won two of the five encounters this season, losing once. Only top-flight Hibernian had won at Gayfield in 21 games since their July victory.

However, as in the first leg, Dick Campbell's side started the brighter side, with Inverness looking tentative playing into a strong wind billowing in from the North Sea.

Shane Sutherland had the first clear-cut chance, the Inverness striker slicing his 15-yard drive into the side netting just after the break.

The visitors were reduced to 10 men when Devine contested a high ball with Jack Hamilton and the defender pulled the Arbroath frontman to the ground as he looked to race clear.

Sutherland was then taken off injured and they had to survive eight minutes of normal time with nine men until they could bring on an additional substitute.

Visiting keeper Ridgers saved from Hamilton and, after Duffy was shown a second yellow card with seven minutes to go for a lunging challenge, Colin Hamilton sent a looping header against the Inverness crossbar.

They survived the late pressure to provide the killer touch in the shootout.

Arbroath manager Dick Campbell: "Anybody who knows anything about football knows we were way, way in front. But I've seen it happen in the play-offs. We had 600 passes, they had 300-odd.

"We're not ones to feel sorry for ourselves. The whole season has been a fairy tale, it'll be memorable. We were close to immortality. We've got to repeat that next year. Christmas has come early for Inverness tonight. I wish them all the best."

Inverness Caledonian Thistle manager Billy Dodds: "It wasn't about us getting through tonight, it was the circumstances we did it in. I have my feelings - I'm just keeping quiet because I'll get myself into trouble.

"My boys gave me absolutely everything. We had to work our socks off. That's the best bunch of boys I've worked with. I would have been proud of every one of them if we lost the penalty shootout tonight."

Goal! Arbroath 0(3), Inverness CT 0(5). Kirk Broadfoot (Inverness CT) converts the penalty with a right footed shot to the centre of the goal.

Goal! Arbroath 0, Inverness CT 0(1). Billy Mckay (Inverness CT) converts the penalty with a right footed shot to the centre of the goal.

Colin Hamilton (Arbroath) hits the bar with a header from the centre of the box. Assisted by Nicky Low with a cross.

Lewis Hyde (Inverness CT) is shown the yellow card for a bad foul.