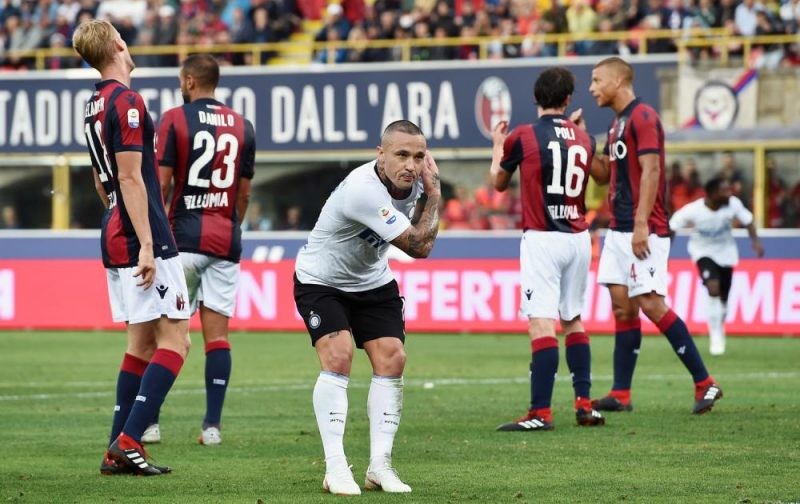 Radja Nainggolan was Inter’s hero as he bagged a debut goal to help down Bologna 3-0 at the Stadio Renato Dall’Ara on Saturday evening.

A dogged Bologna side held out for 66 minutes before Nainggolan struck, then Antonio Candreva and Ivan Perisic added late goals which made sure of Inter’s first Serie A win this season.

Inter went into the game on an eight-match unbeaten streak against the Rossoblu, who hadn’t won against the Nerazzurri at home in Serie A since February 2002.

Ahead of the match, Inter suffered a blow as captain and talisman Mauro Icardi was unable to take to the field due to a muscle problem.

It was almost the dream start for Inter who missed an open goal with goalkeeper Lukasz Skorupski completely misjudging a ball into the box, but Perisic was unable to make him pay. At the other end, Filip Helander forced a good save from Samir Handanovic with a close range header.

Inter, with almost 70 percent possession in the opening 45 minutes were unable to turn that dominance into a lead, and never really tested the Bologna goalkeeper.

It was much of the same as the second half began with Inter unable to break down the Bologna wall, until Nainggolan was played into the penalty area by Matteo Politano, and fired into the bottom corner much to the delight of his teammates and travelling fans.

The goal forced Bologna to attack and they almost had an equaliser when Federico Santander flashed a header inches wide of the post, but that was as good as things got for the home side.

As just before the end, a swift counter attack and low Perisic cross found Candreva, who side-footed into the net. Perisic added number three not long after.