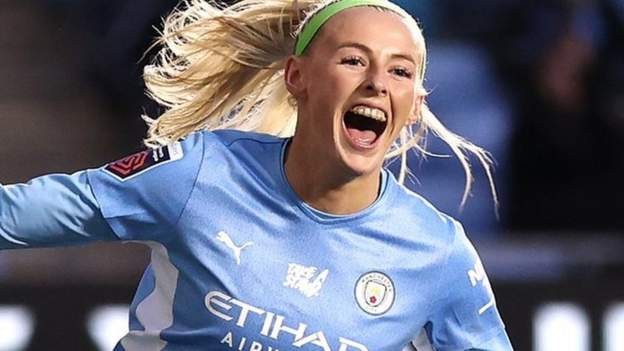 A year ago, playing in an FA Cup final was something Manchester City forward Chloe Kelly could only dream of after suffering an anterior cruciate ligament injury.

However, after 11 months on the sidelines, the 24-year-old has now returned to the pitch "hungry" for success and still hopeful of making a late claim for a place in the England squad at this summer's Euros.

She will have the chance to impress on the biggest stage on Sunday as City look to claim their second trophy of the season against holders Chelsea in the FA Cup final at Wembley.

According to Kelly, City do not fear any team in the Women's Super League, not even the newly crowned champions.

"There's not a team in the league that can match our footballing ability," Kelly told BBC Sport. "I think the way we play is brilliant and that's why I love playing here at Manchester City."

Both teams are targeting their second pieces of silverware for the season.

Chelsea clinched a historic third successive WSL title last Sunday, but City will be hoping to add to their Continental League Cup trophy that they won in March by beating Emma Hayes' side 3-1 in the final.

"We know we beat them in the Continental Cup already this season so that gives us a bit of confidence going into the game." Kelly explained.

"Of course they have their threats but we need to focus on what we can do to break them down and find their weaknesses, rather than worrying about them too much."

FA Cup fever has spread through Kelly's family and friends, with around 90 of them snapping up tickets to support her at Wembley.

"The whole family are looking forward to it, probably more so than me because I have played at Wembley before but without the fans there, so this time to do it in front of my family will be extra special," said Kelly, who joined City from Everton in 2020.

"My mum probably won't even be watching the game, she will probably be chatting to keep her mind off it."

It has been a long journey back for the England international since that match against Birmingham in May 2021 where she scored twice before a clash of knees caused her ACL injury.

"I have watched it back a fair few times but I know that wasn't in my control, it was a challenge. So when people do their ACLs and it is non-contact, maybe you don't trust your body as much any more, but I trust my body. I don't have any fear in my knee, I feel good," Kelly said.

"When you have that spell on the sidelines, when you come back you just appreciate it so much more so I am just enjoying every minute back on the pitch.

'Everyone wrote us off'

On paper Gareth Taylor's side head into Sunday's final as underdogs having finished third in the WSL, nine points behind Chelsea, but they are arguably the league's most in-form team after winning their past 13 games in all competitions, scoring 46 goals in the process.

City have bounced back from an injury-hit start to the season which saw them lie in ninth place in November. "I think the start was difficult," Kelly said. "Everyone wrote us off for the Champions League.

"But we always believed that we'd qualify for the Champions League and to be in the FA Cup final. We've won the Conti Cup already and third place in the league - no-one really expected that other than ourselves."

Fully recovered and rediscovering her best form, Kelly is also hoping to defy the odds by making Sarina Wiegman's England squad for the Euros, which begin on 6 July.

"In myself I knew I would get back and I would be on the pitch back to my best again but I think from the outside looking in people didn't think I would be in this position now," she said.

"Of course I want to be at that Euros and that's what I am fighting for at the moment. Each game is a stepping stone for getting there so I'm focusing on taking each week as it comes."

Is dancing better than traditional fitness exercises?: Why busting a move can enhance your fitness, your mood and the size of your brainHonest grub, honest opinions: Five of the nation's top-rated chip shops roll into Manchester for the ultimate fry-off