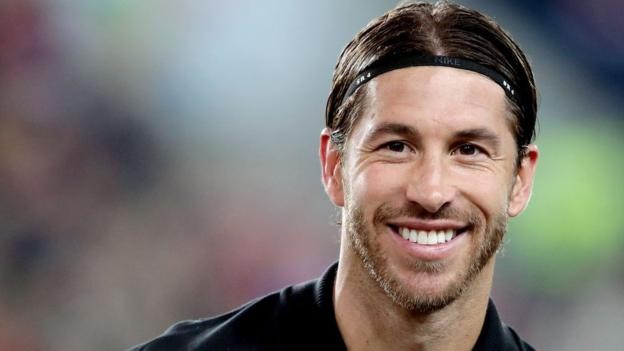 Sergio Ramos was making his 168th appearance for Spain

A win in Sweden on Tuesday will secure Spain's qualification.

"All that is personal is a little secondary," said Ramos after the game.

"I would have happily traded this 168th cap for a victory. It was not the case. But this record is a great reward after so many years and it's a great source of huge pride.

"I am emotional every time I put on this shirt. That will not change and I hope to continue doing so for many years."

Spain looked to be heading for a seventh straight win in qualification until Chelsea goalkeeper Kepa Arrizabalaga brought down Omar Elabdellaoui.

Bournemouth's King rolled home the spot-kick in the 94th minute to leave Norway in fourth place in Group F.

Real Madrid's Ramos, 33, made his Spain debut in 2005 and is one of the last survivors of a golden era that won a World Cup and two European Championships.

The defender has some way to go if he wants to break the world record, however, with former Egypt midfielder Ahmed Hassan playing 184 times for his country between 1995 and 2012.

Kepa Arrizabalaga (Spain) is shown the yellow card for a bad foul.

Penalty conceded by Kepa Arrizabalaga (Spain) after a foul in the penalty area.

Fabián Ruiz (Spain) hits the right post with a left footed shot from the right side of the box. Assisted by Rodrigo.

Fabián Ruiz (Spain) is shown the yellow card for a bad foul.

Haitam Aleesami (Norway) wins a free kick in the defensive half.

Sergio Busquets (Spain) wins a free kick in the defensive half.

Attempt missed. Joshua King (Norway) right footed shot from the centre of the box is too high. Assisted by Martin Ødegaard following a fast break.

Attempt saved. Ole Selnaes (Norway) left footed shot from a difficult angle and long range on the left is saved in the centre of the goal. Assisted by Even Hovland.

Attempt blocked. Ole Selnaes (Norway) left footed shot from the centre of the box is blocked. Assisted by Alexander Sørloth with a headed pass.

Attempt saved. Santi Cazorla (Spain) left footed shot from the left side of the box is saved in the bottom left corner. Assisted by Fabián Ruiz.

Juan Bernat (Spain) wins a free kick in the defensive half.

Fabián Ruiz (Spain) hits the bar with a left footed shot from outside the box. Assisted by Rodrigo Moreno.

Sergio Busquets (Spain) wins a free kick in the defensive half.

Foul by Even Hovland (Norway).

Sergio Busquets (Spain) is shown the yellow card for a bad foul.

Attempt missed. Saúl Ñíguez (Spain) left footed shot from outside the box is high and wide to the left. Assisted by Dani Ceballos.