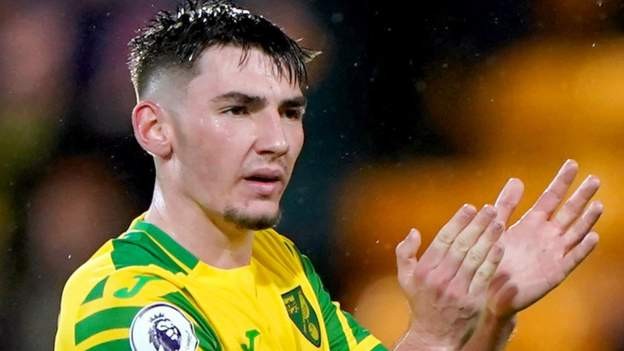 Norwich's resistance against relegation continues as they more than matched Wolves in a goalless draw at Carrow Road.

It could easily have been more for the hosts. Striker Teemu Pukki, who has scored four of their seven league goals so far this season, could only prod straight at goalkeeper Jose Sa from a fine second-half chance.

Wolves underwhelmed as they faded out of the contest and were ultimately grateful for a point after Lukas Rupp's weak side-foot effort ended a promising Norwich move in the 80th minute.

Norwich are now three points clear of bottom side Newcastle.

The Canaries gave the rest of the Premier League a substantial head start on the season, losing their opening six games.

But Daniel Farke's managerial reign ended with victory over Brentford and Dean Smith's started with a 2-1 success against Southampton last weekend.

A third successive victory here would have meant only goal difference separating them from a first escape from the relegation zone this campaign.

Max Aarons made and wasted the best chance of the first half, jagging in off the right flank, swapping passes with Rupp and drilling a low shot into the shins of Sa.

Pukki and Josh Sargent, preferred to Todd Cantwell, looked lively in attack, if less than assured on their occasional sights of goal.

Milot Rashica and substitute Rupp continued the good work after the break and it was Rupp's deft through ball that got Pukki in behind for his best sight of goal.

The final whistle was greeted with cheers from the home fans and manager Dean Smith will be quietly confident that his upwardly mobile side can deepen the doom at Newcastle when the sides meet on Tuesday.

Norwich 0-0 Wolves: We 'can be more aggressive' in the final third - Bruno LageToothless Wolves face up to tough run

Wolves' hopes of mounting a serious challenge for a Champions League spot have grown after a similarly slow start to the season. They had won five of their previous seven games and another victory would have moved them to within a point of fourth-placed West Ham.

But, just when they needed to assert themselves with urgency after the break, they fell away.

They rarely threatened Norwich in attack and their pressing game out of possession seemed to run short of steam.

The visitors were limited to occasional raids forward on the counter, with their best opening coming courtesy of Norwich defender Grant Hanley's undercooked backpass to goalkeeper Tim Krul.

They have another eight games over the next 37 days, including meetings with Liverpool, Manchester City and Chelsea before Christmas.

Their failure to pick up maximum points in East Anglia might be most keenly felt in the midst of that hectic, high-profile run.

Attempt missed. Teemu Pukki (Norwich City) right footed shot from the centre of the box misses to the right. Assisted by Kieran Dowell with a cross.

Attempt missed. Raúl Jiménez (Wolverhampton Wanderers) right footed shot from the centre of the box is high and wide to the right. Assisted by João Moutinho.

Grant Hanley (Norwich City) wins a free kick in the defensive half.

Romain Saïss (Wolverhampton Wanderers) wins a free kick in the defensive half.