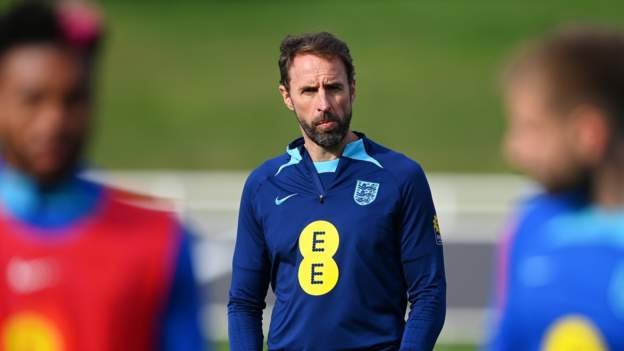 Gareth Southgate says England's players cannot do much more other than discuss human rights issues in the build-up to the 2022 World Cup in Qatar.

Captain Harry Kane will wear a OneLove armband in England's upcoming Nations League games and at the World Cup.

But the FA has been criticised for the delay in its statement on human rights.

"There is not a lot more the players in particular can do other than talk about those issues and put them on the table," said England boss Southgate.

"In the end, we are asking for change in a country we are respectful of, [which] has made progress, but [we] don't have any control over," he added.

The FA, which said it has been in dialogue for more than a year with human rights organisations, trade unions and non-governmental organisations, has also backed calls for compensation to be awarded for "any injury or death related to any construction project".

"It was about coming together," Kane said. "There is only so much the players can actually do and wearing the armband on the biggest stage in the world will have an impact.

"But we can only do what we can. We have definitely taken a step forward to help some of the issues in Qatar."

Qatar's chief organiser Hassan al-Thawadi said on Thursday that the country is no longer listening to "sceptics" as it prepares to host the tournament in November and December.

"Qatar has long passed the stage of responding to sceptics of its ability to host the World Cup", organising committee secretary-general Al-Thawadi told the Qatar News Agency.

"From the first day, we were sure that actions on the ground will prove to everyone Qatar's ability to host a major tournament like the World Cup."

England meet European champions Italy in Milan on Friday (19:45 BST) in their penultimate Nations League group match, before taking on Germany at Wembley on Monday.

Only two victories from those fixtures - England's last until their World Cup opener versus Iran on 21 November - will guarantee Southgate's side avoid a first relegation in the competition, which began in 2018.