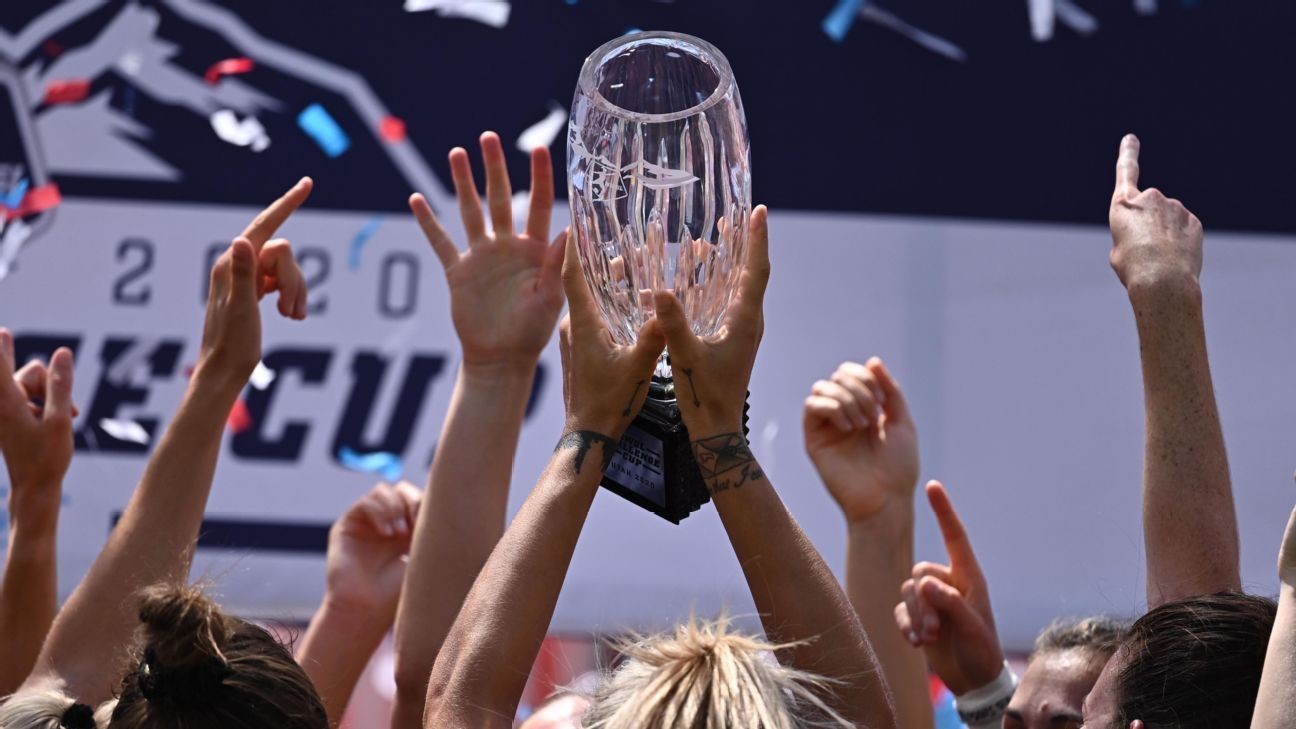 There are moments when difficult circumstances can yield a new and better way of doing things. So it goes with the 2021 NWSL season. When the league emerged from the COVID-induced shutdown last year before any other sports league, it did so via what it called the Challenge Cup, which was held in a bubble in Utah.

Fran Kirby's ultimate battle: How the Chelsea women's star beat heart disease to get back to the top

It was such a hit that the NWSL decided to reprise the tournament, essentially using it as a way to kick off the 2021 season, although this time games will be held in home markets. From there, the NWSL will move on to the usual cadence of regular season and playoffs, but the opening competition figures to get the year up and running in a unique way.

There is also a new expansion team coming on board in Racing Louisville, and a relocated team in Kansas City FC (formerly known as the Utah Royals). But the biggest news of all might be the influx of high-profile investors.

All told, the buzz around the league is reaching new heights. -- Jeff Carlisle

Despite losing Sam Mewis (Manchester City), Abby Dahlkemper (Manchester City) and Crystal Dunn (Portland Thorns) during the offseason, North Carolina is still one of the favorites to advance in the East division. It's a testament to the squad that Paul Riley has built that so many still see them as a threat, and they kick off their tournament with a difficult assignment against Washington Spirit. The latter will be missing Kelley O'Hara and Emily Sonnett, but will still fancy their chances in a game that could become key as to who makes the final against the winner of the West division.

Julie Foudy explains why North Carolina vs. Washington is her pick of the NSWL Challenge Cup's opening games.

The Houston Dash are used to flying relatively under the radar, but a big 2020 that included becoming Challenge Cup champions has put them out front and center. How they cope with the pressure is yet to be seen but they will be hoping for some big games from Kristie Mewis, albeit when she's not off with the USWNT.

Elsewhere, OL Reign's links to some big Lyon names is exciting, but any moves are likely to come later in the season and therefore won't help their run at the Challenge Cup. With the addition of Dunn at the Portland Thorns, alongside their 2020 rookie class and established names like Lindsey Horan and Becky Sauerbrunn, it's hard to look past them as possible finalists, but an Olympic year means squads with lots of international talent are likely to suffer. Don't be shocked if there is a surprise in the West. -- Kathleen McNamee

Who will lift the NWSL Challenge Cup in 2021? Nils Nilsen /Sports Illustrated via Getty ImagesWhich teams will be hurt most by Olympic absences?

It still remains to be seen what the NWSL schedule will look like during the Olympics, but it's likely every team will be impacted on some level -- between American and international players -- in the lead up and through the tournament, which spans from July 21 to Aug. 7. Unlike the World Cup, which allots 23 roster spots, there are just 18 during the Olympics, which makes projecting the rosters a bit tricky.

Portland figures to be among the most impacted as Americans Sauerbrunn, Dunn and Horan, plus Canadian forward Christine Sinclair, will all play key roles for their national teams in Japan. Chicago will likely be without stars Alyssa Naeher, Tierna Davidson and Julie Ertz, while Washington, OL Reign, North Carolina and Houston also have multiple players in the mix for the Olympics. -- Kyle Bonagura

Some of the league's biggest stars had to fill out change-of-address cards. The biggest arguably was USWNT star Dunn heading from the Courage to Portland, giving manager Mark Parsons another stellar player to build around.

But there were some other big moves as well, including a slew of USWNT players moving overseas. Mewis and Dahlkemper left North Carolina for Man City, with Rose Lavelle joining them from Washington. Tobin Heath and Christen Press moved to the red half of the city with Manchester United. The hope is that some will return stateside, with Racing Louisville already grabbing the rights to Heath (from Portland) and Press (from Kansas City, formerly Utah), while Lavelle's rights were acquired by OL Reign.

Within the league, Washington acquired O'Hara from Kansas City while Sonnett arrived in the nation's capital after spending part of 2020 in Sweden, with the Spirit acquiring her NWSL rights from Orlando. -- Jeff Carlisle

play1:49 USWNT's Trinity Rodman is on the hot seat in ESPN's 'You Have To Answer'

Christian Pulisic or Gio Reyna? Ronaldo or Messi? USWNT's Trinity Rodman takes part in ESPN FC's latest edition of "You Have To Answer."

Out of all the sides, an elongated preseason may have benefited expansion teams the most as they were given time to work out their on-pitch identity. Kansas City also had the added benefit of not starting from scratch. Coach Huw Williams inherited the Utah Royals squad, meaning there will be more expectation on them to click quicker than a normal expansion side.

A behind-the-scenes look at Alex Morgan and her USWNT teammates, who are paving the way for the generations who will follow their lead. Stream on ESPN+ (U.S. only).

Racing Louisville, on the other hand, are very much starting fresh and have talked at length in recent months about building from the ground up. It will be a tough season for Christy Holly's squad, who will compete with a smaller roster of players that haven't been together all that long.

However, with it being an Olympic year, this may be a blessing in disguise as he will be able to keep a more consistent team throughout -- injuries and other unforeseen issues aside. Their opening game against the Orlando Pride -- who struggled in preseason and will be without Alex Morgan, who is at USWNT camp -- provides a good opportunity to test the waters and see exactly what this side is made of.

Overall, the Challenge Cup will be an important barometer for these sides when it comes to seeing how far along they are in their development. -- Kathleen McNamee

Julie Foudy explains why North Carolina vs. Washington is her pick of the NSWL Challenge Cup's opening games.

Portland invested the top two picks of the 2020 draft in forwards Sophia Smith (Stanford) and Morgan Weaver (Washington State), but a knee injury to Smith, combined with the pandemic-shortened season, prevented the Thorns from getting an extended look at them playing together. Smith was the youngest player called into the USWNT for upcoming friendlies against Sweden and France and the only member of the last two NWSL draft classes on the roster.

Racing Louisville used the No. 1 overall pick in the 2021 draft on defender Emily Fox (North Carolina) ahead of their debut season. Fox, who was initially capped by the USWNT as a sophomore in 2018, came off the bench in the United States' 6-0 win against Colombia in January.

At 18 years old, Trinity Rodman, the daughter of former NBA player Dennis Rodman, was selected No. 2 by the Washington Spirit out of Washington State, but never appeared for the Cougars. She has been a prolific scorer for the United States at youth levels and has a chance to make an immediate impact. -- Kyle Bonagura