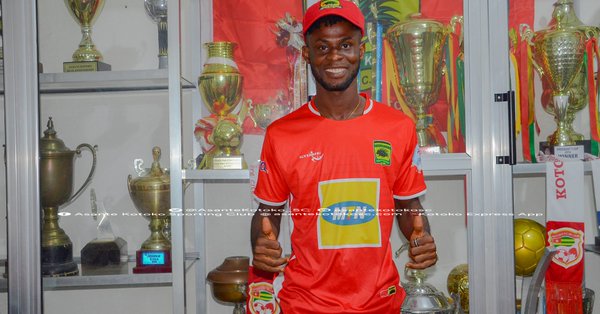 The Black Stars B player signs after passing a routine medical examination conducted by the Dr. Twumasi Baah-led Medical Team.

Kelvin Andoh has become the third signing for Asante Kotoko in the current transfer window after the snapping up of goalkeeper Kwame Baah and midfielder Justice Blay.

Kelvin Andoh joins the Porcupines on a free transfer, having severed ties with the Wa-based club after the expiration of his contract.

The nimble-footed player played a key role in Wa All Stars’ quest to the 2016 Premier League title and was also influential for the Black Stars B when Maxwell Konadu’s side won the 2017 WAFU tournament in Ghana.

Kelvin Andoh spent some days on trails at the club, justifying why he should be recruited by the team which is set to compete in the 2019/20 Champions League.

The signing, therefore, comes as a confirmation of the technical team’s satisfaction with the player's current form.