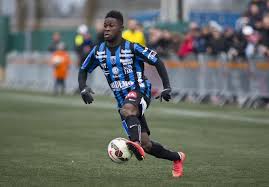 Ghanaian player Kingsley Sarfo's contract with his club side Malmo FF has been cancelled after he was sentenced to jail.

Malmö FF confirmed on their official website that the midfielder is no longer with the club.

"On Friday, Kingsley Sarfo was sentenced to a long-term prison sentence for very serious crimes. Kingsley Sarfo is consequently dismissed with immediate effect. The actions are incompatible with the MFF's values ​​and the behavioral requirements imposed on the association's representatives," writes MFF.

"Malmö FF will act against both the player and his former club to take advantage of the association's financial interests," the club continues.

Sarfo was sentenced to two years and eight months in prison and expulsion for two cases of rape against children.

"We have now called him - through his lawyer - for a sum corresponding to the sign-on bonus he received when signing the contract," said Nicolas Carlnén, MFF's CEO.

How big that sum is, MFF does not want to comment. According to Sydsvenskan, it amounts to between SEK 1 and 2 million.

Exactly how MFF will act against Sarfa's former club IK Sirius, Carlnén does not want to reveal.

"I do not say more than we will act. That dialogue we will have directly with Sirius, he says to Sydsvenskan.

However, Sirius chairman Ove Sjöblom has difficulty seeing that MFF can demand back parts or the entire transfer sum.

"For me, it would feel very strange if there would be such a requirement because there must always be a legal basis for building a recovery. What it would be, I do not know, but we'll have to wait and see, "says Sjöblom to UNT.