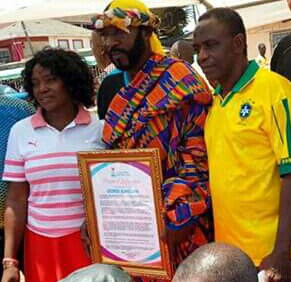 Former Ghana international and Olympics star, George Alhassan has been enstooled a Chief of Football at La, a suburb of Accra.

The two-time Africa Nations Cup winner is widely regarded as being the La community’s most inspirational footballer.

An exhibition match between a George Alhassan All-Star team and La Oldies somehow lived up to its billing as spectators were thrilled with humorous and entertaining football.

The match at the La Town Park saw George Alhassan playing for the opening 15 minutes before being substituted because of injury.

The event, organised by the La Old Stars Football Association in partnership with McDan Group of Companies was to honour the 1982 AFCON golden boot winner, for his immense contributions in the development of football in La.