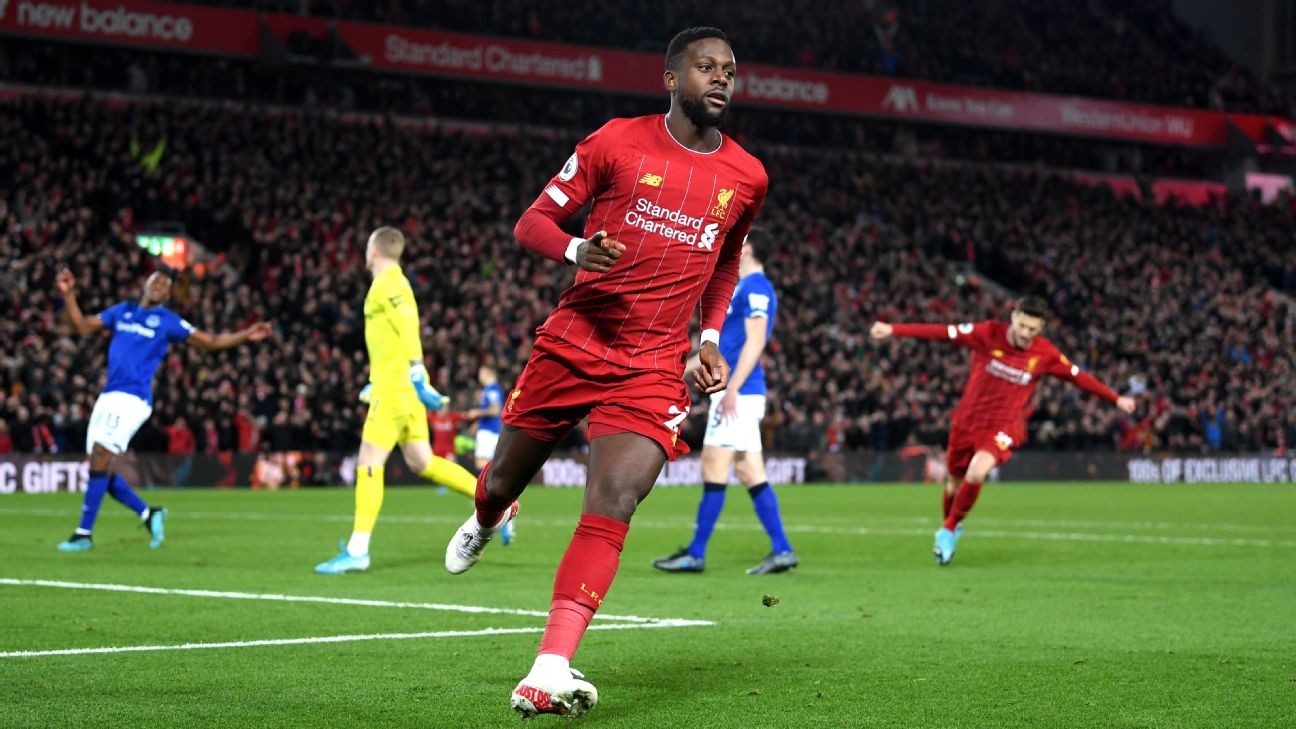 Will the Merseyside derby be Marco Silva's last game in charge? The Exploding Heads preview Liverpool vs. Everton.

Don Hutchison says Liverpool's dominance at home will be a key factor in them winning the Premier League.

Steve Nicol says Liverpool are so good they win despite not playing as well as years past.

The home side took the lead through Divock Origi, who clinically rounded Jordan Pickford to slot home. Soon after, Sadio Mane was again the provider, as Xherdan Shaqiri marked his return to the first team with a lovely taken goal. Everton did briefly strike back through Michael Keane, but Origi wasn't done for the night, the Belgian forward gorgeously bringing down a Dejan Lovren long ball, before firing home to restore Liverpool's two-goal advantage.

Jurgen Klopp's side would again open the Everton defence just before half-time, Mane getting his richly deserved goal from the edge of the area. Everton would net what proved to be a consolation goal, but ultimately, Liverpool would win in style, thanks to a late Georginio Wijnaldum strike, to reassert control once more in the title race.

Jurgen Klopp took a big risk in resting the likes of Mohamed Salah and Roberto Firmino, but the performances of their deputies -- Divock Origi and Xherdan Shaqri --will perhaps be the most pleasing aspect of tonight's win. The victory also highlights just how good of player Mane has become: he can create, he can score -- even without the help of his Egyptian and Brazilian running mates.

On the flip side, Liverpool were once more left embarrassed by defensive errors and suspect marking. Just when the home side looked like they would go on and secure a landslide win, Everton would creep their way back into the game -- not through skill or guile -- but instead, due to sloppy mistakes from the backline.

8 -- The German's selection raised a few eyebrows prior to kick-off, as Klopp chose to rest the likes of Salah and Firmino. In their place came Shaqiri and Origi, who would soon justify Klopp's faith, as the pair netted Liverpool's first two goals -- a superb piece of squad management from the gaffer.

GK Adrian, 6 -- The stand-in stopper could do little to deny Keane or Richarlison, with both goals coming primarily from ropey Liverpool defending. Elsewhere, his distribution was solid, amid fears of a drop-off in Alisson's absence.

DF Trent Alexander-Arnold, 8 -- The young Scouser came to embody the spirit of the Merseyside derby in the first half, following a few rash skirmishes with Richarlison. However, he was soon able to release any pent-up frustration, by providing a wonderful crossfield switch which resulted in Shaqiri's goal. He soon grabbed an assist for himself, perfectly teeing up Mane on the counter.

DF Dejan Lovren, 6 -- Frustrating and brilliant almost in equal measure. The Croatian could be viewed as the culprit for both of Everton's first-half goals, after a less than convincing defensive display. However, the 30-year-old's pinpoint assist for Origi's second goal of the game made up for his earlier errors.

DF Virgil van Dijk, 7 -- Fresh from Ballon d'Or disappointment, the towering Dutchman was certainly not at his dominant best. A clumsy challenge on Dominic Calvert-Lewin may well have led to an Everton penalty, but fortunately for Van Dijk, he escaped punishment. Put in a far more assured display in the second half.

DF Andrew Robertson, 6 -- While not as impactful as his fellow full-back, Andy Robertson did maintain the kind of intensity and energy going forward that we have all become accustomed too. The Scotland captain also linked up well with Mane down the left-hand side, often to devastating effect.

MF Adam Lallana, 7 -- After such a long time out of the team, rustiness was perhaps inevitable, and that was certainly visible early on. However, the former Saints man gradually improved throughout, retaining possession in key areas, and never relenting in terms of his pressing -- something which will certainly please his manager.

Divock Origi again proved to be Everton's undoing for the second straight season, bagging a brace in the Merseyside derby.

MF James Milner, 7 -- While often wasteful going forward, the veteran midfielder did certainly make up for any creative shortcomings by doing the dirty work to the best of his ability. In the absence of Fabinho, Milner filled in fairly well, by contributing with some crucial tackles and interceptions.

MF Georginio Wijnaldum, 7 -- 'Gini' was arguably the quietest of Liverpool's midfield trio in the first half but soon grew in importance, breaking the play up expertly in the second period, as Liverpool attempted to wrap up the win.

FW Xherdan Shaqiri, 7 -- Following a lengthy spell out of the Liverpool starting XI, tonight's goal will come as a huge relief to the versatile creator. He took his goal well, hitting the ball early to catch out Pickford, in what could prove to be a vital turning point in the 28-year-old's Liverpool career.

FW Sadio Mane, 9 -- He was simply majestic in the absence of his regular attacking comrades. However, Shaqiri and Origi proved to be fully up the job, scoring well from Mane's beautifully crafted through balls. Tonight's man of the match performance was the biggest example yet of the Senegalese star's importance to Klopp's side.

FW Divock Origi, 9 --There's just something about Origi, as it's as if he needs a big-name opponent to get himself up for the match. Whatever the reason may be, you simply can't deny Origi's impact in clutch moments, and in clutch games. Two clinical finishes, coming from sublime first touches, further highlight his ability to step up in times of need. Perhaps Klopp should rest Salah and Firmino more often.

MF Jordan Henderson, 6 -- The skipper came on with half an hour to go, injecting the game with his customary energy, while also contributing with some vital tactical fouls.

FW Roberto Firmino 7 -- The Brazilian almost instantly registered an assist, only for Mane to undo his fine creative work. He got it a little later, wonderfully cutting back to find Wijnaldum -- who scored the sides fifth goal.

DF Joe Gomez, N/R -- A brief appearance to give Alexander-Arnold a break at the end.