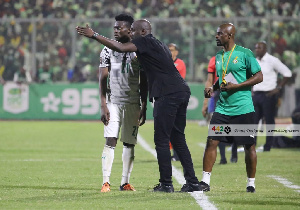 Former Ghana assistant coach Ibrahim Tanko is confident Otto Addo and his coaching crew can lead the Black Stars to the promise land when given the job on full time basis.

On Tuesday, the Ghana FA president Kurt Okraku confirmed efforts by the football body and other relevant stakeholders to secure the services of interim Black Stars coach Otto Addo and his backroom staff on a long-term basis ahead of the FIFA World Cup later this year.

Otto Addo has received admiration of all relevant stakeholders after successfully masterminding Ghana’s return to the World Cup with support from George Boateng, Didi Dramani and Chris Hughton.

The FA is keen about extending Otto Addo’s contract and his backroom staff made of the likes of Mas Ud Didi Dramani, George Boateng and Richard Kingston.

Speaking to Footballghana.com, the former Ghana assistant trainer expressed believe in Otto Addo and his technical crew and is of the view they can lead the Black Stars to the promise land.

“I think these four men are top coaches. Their performance against Nigeria gives us all hope and that, they can take us to the promise land. So, definitely, I am in support of them going to the World Cup and also taking through the AFCON qualifiers”

Ghana will face Portugal, who beat Ghana 2-1 in the group stages on their last appearance at the tournament in 2014, and South Korea in Group H in Qatar before their anticipated re-match with two-time World Cup winners Uruguay.