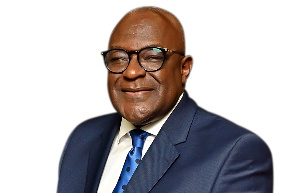 Kumasi Asante Kotoko board member, Kwadwo Boateng Genfi has mentioned that their first priority as a board is to win the Ghana Premier League and subsequently represent Ghana in Africa inter club competitions.

The Chief Executive Officer of Ghana EXIM bank despite admitting to the difficulties in running the club says it is a privilege to the one of the most glamourous clubs in the country.

The experienced Global Business Executive was appointed with 8 others to form the Asante Kotoko board, a body they have been lacking since Kwame Kyei took over three years ago.

In an interview with Kessben FM, he expressed gratitude to the life Patron of the club, Otumfour Osei Tutu II for the honour made him to serve the club.

“Our immediate target will be winning the league and then proceed to do well in Africa”.

“I was born into Kotoko and have been a supporter since. I was a footballer myself. My playing style was like Opoku Afriyie of blessed memory”.

With Asante Kotoko looking a sleeping giant, Kwadwo Boateng Genfi admits plans to revive the club and take it to where it rightfully belongs is an arduous but doable task.

“The task is a difficult one but it is doable” he noted.

He has however acknowledged that to realize their objectives of winning on the pitch, the club requires quality players.

He has promised that the club plans to travel beyond the boundaries of Ghana to recruit the best of talents if need be.

To win as a club, Asante Kotoko will need the backing of their millions of fans. This is something new board member Kwadwo Boateng Genfi says the board won’t overlook.

“The supporters are very important and we will urge them to continue to support the team” he mentioned.

The new Asante Kotoko board will be chaired by Kwame Kyei. The businessman will be assisted by Jude Arthur, who served as a board member in 2013. Tema-based businessman and two-time board member Alhaji Lamine has also been brought back to be part of the new team.

Former sports journalist Evelyn Nsiah Asare, who is now Director of Sports at the Sunyani Technical University is also part of the board.