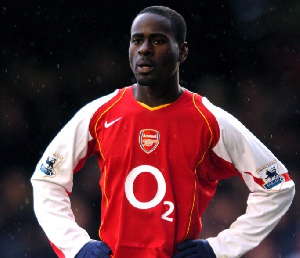 With the signing of Thomas Partey, Arsenal have added to their extensive catalogue of African players to represent the club – footballers hailing from all four corners of the sprawling continent have turned up in north London.

And it’s fair to say those players have enjoyed contrasting fortunes in English football. For every gem, there have been at least two players who have distinctly underwhelmed.

Here, we rank every African player to represent Arsenal during the Premier League era from worst to best:

It is common knowledge that Arsene Wenger bought a wealth of knowledge about European football to his role at Arsenal that was genuinely ground-breaking at the time. However, for every Patrick Vieira, there was a Jehad Muntasser.

Signed from Italian club Pro Sesto in 1997, the Libyan made one brief first-team appearance in the League Cup before being loaned to Bristol City and released two years later.

It’s hard to think of a more accurate interpretation of the word forgettable.

One League Cup appearance before being released?

Destined to become an impossible answer on future pub quizzes?

Check, check and check…unless, of course, you’re a Planet Football superfan and remember Itonga gave us a brilliant interview in June 2020.

Currently plying his trade for AC Milan, Bennacer was named player of the tournament as Algeria were crowned champions of Africa in 2019.

His impact at Arsenal? One League Cup substitute appearance in 2015 during a thrashing by Sheffield Wednesday.

Still only 22, this is clearly with some talent. But he cannot be seriously ranked any higher on this list.

Having toured France more extensively than a clutch of super-fit cyclists throughout his career, Diawara made 12 league appearances for Arsenal in 1999 without troubling the scoresheet.

Another young talent with unfulfilled promise, expectations around Owusu-Abeyie soared after he notched six goals in an U21 match against Wolves in 2002.

Despite scoring two actual goals for the club, it never looked likely that the Ghana international would properly break through at Arsenal considering he was competing with the likes of Thierry Henry and Dennis Bergkamp for a place in The Invincibles’ team.

He had a nomadic career after his departure in 2006, most successfully with Panathinaikos.

If you want to know somebody’s true nature, observe their actions upon leaving a place close to their hearts.

Frimpong, cousin of Lethal Bizzle, departed Arsenal for Barnsley in 2014 upon which he took to Instagram and lamented ‘how am I gonna draw girls now?’. This was clearly a man not ready to embrace all that south Yorkshire could offer him.

He most recently played in Cyprus with Ermis Aradippou and is currently unattached. That’s not dench.

Popular perception suggests that Chamakh is better remembered for his seagull baiting haircut than his performances at Arsenal.

But the Moroccan had a semi-successful first season at the Emirates. Signed on a free from Bordeaux in 2010, Chamakh scored 11 goals across all competitions as Arsenal challenged on multiple fronts before their annual spring collapse.

Things went downhill thereafter as he was loaned out to West Ham (of course) before spells at Crystal Palace and Cardiff. Considering the noise surrounding his signing, Chamakh definitely didn’t live up to the hype.

Traore seemed to be one of those players exclusively used in early round League Cup ties, where the latest batch of Arsenal youngsters would humiliate some rugged Championship opponents with the ease of Usain Bolt outsprinting Peter Griffin.

But the Senegal full-back actually made a total of 32 appearances across five seasons before leaving for QPR. You might not remember it, but it happened.

It is easy to forget the impact Iwobi made upon his first-team breakthrough at Arsenal, scoring in his first two Premier League games in 2016.

He seemed a genuinely exciting prospect at the time, but the winger never quite pushed on from this and was sold to Everton for a £28million fee that produced more than a few double-takes – and plenty of nutmegs.

Signed in 2015, Elneny has made close to 100 appearances for Arsenal without ever really threatening to establish himself, but he has another chance under Mikel Arteta.

The Egyptian midfielder had a decorated spell at Champions League perennials Basel before arriving in north London. And Elneny hasn’t exactly disgraced himself with Arsenal. He just isn’t Patrick.

Gervinho personified Arsenal during the early 2010s – talented, inconsistent and the true meaning of the word enigma.

This is perhaps not a surprise for a player who’s entire gameplan was modelled on instinct and on outfoxing everybody, including himself. Defenders stood as much chance at predicting the Ivorian’s next movement as a dog does in predicting the return of its owner.

The forward scored 11 goals in two seasons at the club before leaving for a more successful spell at Roma.

The signing of Nicholas Pepe was greeted with more enthusiasm by Arsenal supporters than David Brent preparing for Comic Relief.

This excitement seemed justified when Pepe sprinted past Virgil van Dijk in an early appearance, a moment that caused Arsenal Twitter to collectively lose all semblance of perspective. A more accurate depiction of the first half of his first season in north London would be his air shot at Bramall Lane a few months later.

He improved the more time went on, but considering the £72million fee, his debut season at the Emirates was underwhelming. However, the Ivorian has the talent to make himself an indispensable asset to Mikel Arteta’s team.

An unfamiliar name for many younger Arsenal fans, Wreh played an important part in the 1997-98 double-winning team.

Signed in the summer of 1997 for £300,000, the Liberian scored vital winners against Wimbledon and Bolton while also netting the only goal in the FA Cup semi-final success over Wolves. Due to this exploits, Wreh started the FA Cup final against Newcastle.

Despite scoring in the 1998 Charity Shield victory over Manchester United, Wreh was squeezed out of contention by the arrivals of Henry and Davor Suker. He ended his career in English football at Bishop’s Stortford and Buckingham Town.

An overlooked yet crucial contributor to one of Arsenal’s finest ever seasons.

Originally a utility player on the fringes of the Arsenal squad, Song quickly became an integral part of the first 11 during the late 2000s.

With the air of a person so laid back they possess no bones whatsoever, the midfielder possessed an impressive range of passing ability – as shown by his assist for Robin van Persie’s volley against Everton in 2011.

Song left for a short-lived spell at Barcelona, before spearheading West Ham’s brief push for Champions League football in 2014-15.

In the face of his frequent scapegoating by the Emirates crowd, Eboue eventually became somewhat of a cult hero at Arsenal.

His desolate reaction to being substituted against Wigan in 2008, after a performance which saw Eboue tackle his own player and give away possession at almost every opportunity, endeared him to some. His steady and committed performances won the respect of many more.

Any player that makes 214 appearances for the club must have done something right. Eboue was more than one bad performance.

An unsung hero throughout his time at Arsenal, Lauren was a no-nonsense full-back that perfectly reflected the silk and steel of Arsene Wenger’s Invincibles.

Gradually replacing Lee Dixon in the starting line-up, Lauren endeared himself to the Arsenal faithful by scoring a winning penalty against Tottenham in April 2002. Not stopping there, his verbal abuse of Ruud van Nistelrooy after that penalty miss earnt him a place in Arsenal hearts forever.

Lauren was an extremely underrated player and Arsenal have arguably not had a more effective right-back since.

Adebayor had some brilliant moments in an Arsenal shirt, the best of which was probably the incredible tee up and volley at White Hart Lane in 2007.

The striker scored 62 goals for the club, 30 of which came in the forgotten title push of 2007-08. Despite collecting red cards like confetti, he also enacted the wishes of most supporters by squaring up to Nicklas Bendtner during a north London derby.

Sadly, the memory of one certain celebration in a Manchester City shirt has turned the Togolese striker into something of a pantomime villain among Arsenal fans. Maybe enough time has passed for a reassessment, but it means he cannot be placed any higher here.

For many Arsenal fans, Kanu is the ultimate cult hero.

Witness his match-winning performance at Stamford Bridge during the first double-winning season. Witness an inventive and ingenious goal against Tottenham, where he dismissively flicked the ball over Luke Young before rifling home. Witness the flailing limbs and two-fingered celebration that would be copyrighted these days quicker than you can say ‘money-making opportunity’.

Never quite a first-team regular, but a much-loved component of Wenger’s most celebrated squads.

Long before Toure became a by-word for defensive mishaps, the diminutive Ivory Coast international was a bedrock at the heart of the Arsenal backline.

Bought in to replace Tony Adams in 2002, Toure made 326 appearances for club over a seven-year spell and impressed many observers with his positional play, tenacity and eye for a handful of goals every season.

More importantly, Toure seemed like a human being with a radiant personality. You can imagine his presence in the dressing room would put a smile on the weariest of faces. Even when pole-axing the manager during a training-ground trial.

Now a coach with Leicester City, Toure is deservedly remembered as an Arsenal legend.

In a field that contains more cult heroes than bonafide legends, the top spot goes to the current talisman at the Emirates Stadium.

Some fans questioned the wisdom of spending £56million on a 28-year-old with a history of injury problems in 2018, especially when the club had recently spent big on Alexandre Lacazette. Others celebrated the purchase of one of Europe’s premier forwards.

The optimists would be proven right. The Gabon captain has proven an inspirational figure at Arsenal and has scored 55 league goals in only 89 appearances. Alongside this, Aubameyang scored a double in the FA Cup final win over Chelsea in 2020, cementing his status as club icon.

After much speculation, he has signed a contract extension that should see him remain at the club into the autumn of his career.

Arsenal have hardly struggled for prolific goalscorers over the last few decades. It says much about Aubameyang that he stands in comparison to the very best of them.