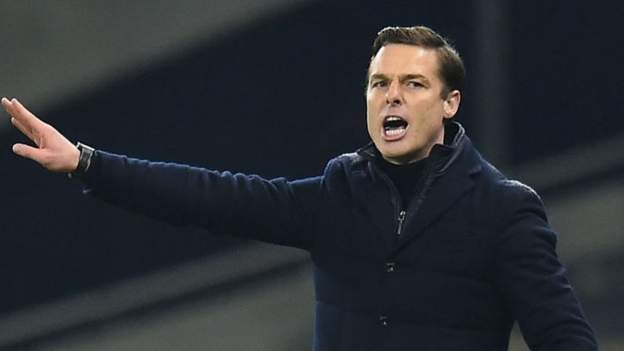 Fulham boss Scott Parker said "no-one knows what we have been through" after his side drew 1-1 with Tottenham despite having just two days' notice the game would go ahead.

The fixture had originally been scheduled for 30 December but was postponed because of a coronavirus outbreak at the Cottagers.

"I'm very proud of this team for what we've been through," said Parker.

"We had players out there who had only trained one day."

He added: "There's a lot of talk around - everyone assumes about what happened. I know what we've been through the last two weeks.

Prior to Wednesday's game, Parker had described the short notice his side were given as "scandalous", prompting Tottenham boss Jose Mourinho to say the Fulham boss should apologise if he named a strong team.

Parker did name a strong side and was rewarded with one of Fulham's best performances of the season at the Tottenham Hotspur Stadium as Ivan Cavaleiro's goal cancelled out Harry Kane's opener.

"Myself and this football club owe no-one an apology because you can talk from the outside and people can see what they want to see and work out what the script was, but it was far from that," said Parker.

"The issue was never about only having two days to prepare for it. I understand that. The issue was 16 days ago this game was scheduled in, since then 10 positive cases of Covid, staff as well, and then 9.30 on Monday we got told that we were playing in the game.

"There were two players on that pitch that had trained one day, come back from Covid and had one day's training. Players had three or four day's training.

"People need to understand the predicament we were in. We are not making it up. We have been very open and had worries for the safety of others too."

The draw extended Fulham's unbeaten run to five games and moved them to within two points of safety.

Mourinho - we have to kill off games

Tottenham 1-1 Fulham: Spurs should have 'killed' the game - Mourinho

Tottenham boss Mourinho, meanwhile, was left frustrated by his side's lack of killer instinct as they failed to put the game beyond Fulham after Kane's first-half strike.

"Once more we concede a goal that is completely avoidable," Mourinho said.

"We have lots of opportunities to kill off matches. In other cases, especially away, we are winning but then don't have that ambition to get the goal and kill the game."