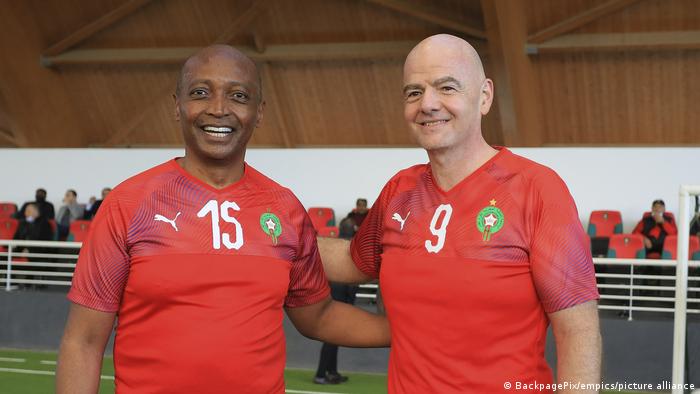 FIFA boss Gianni Infantino had a hand in the election of South African billionaire Patrice Motsepe as head of the African Football Confederation. But it’s a decision that could come back to haunt Infantino.

Patrice Motsepe presents himself as a team player. "African football needs collective wisdom," the 59-year-old South African said before his election as the new president of the Confederation of African Football (CAF) on Friday in Rabat, Morocco. "If we all work together with our experience, talent and passion, football in Africa will see success and growth that it has not seen in the past. It will take all of us to achieve this."

The other candidates for the top post in the CAF had withdrawn their bids after being promised other roles through FIFA president Gianni Infantino and some of his senior representatives. Augustin Senghor of Senegal and Ahmed Yahya of Mauritania will become CAF vice-presidents, while Jacques Anouma of Côte d'Ivoire will become chief adviser to Motsepe. Former incumbent and Infantino confidant Ahmad Ahmad, of Madagascar, wanted to run but was unable to as he’s serving a two-year ban on corruption charges.

"I am happy that FIFA could contribute, even if only a little, to this decisive moment for football on this great continent," Infantino said after the deal was done, reducing the election in Rabat to a mere formality.

However, critics in Africa accuse Infantino of "indirect recolonisation", "where Europeans impose their preferred leaders on others", as the South African newspaper The Sowetan described it. Motsepe is now indebted to Infantino and must presumably repay him at some point. Perhaps, for example, with the 54 African votes for a possible re-election of the Swiss in 2023. "As a man who has been in politics and the business world for decades, Motsepe will know only too well that there is no such thing as a free lunch," wrote The Sowetan.

Motsepe isn’t in this to get rich, he already is. "My friends would call me a 'black capitalist'," he once said. In 2008, he became the first Black African on the Forbes list of the richest people in the world, Currently, his fortune is estimated at about €2.7 billion, making him the ninth richest man in Africa.

Motsepe was born in 1962 in a township in Johannesburg. He started working in his father's small general store near Pretoria while still at school. Later, Motsepe studied law and joined a law firm, specializing in mining law. In the 1990s, he entered the mining business and made a fortune there. His tactic: he bought up ailing mines at a low price and then cut costs. Today, his company ‘African Rainbow Minerals’ owns gold, platinum, nickel, coal and iron mines. He is also the CEO of Harmony Gold, one of the largest gold mining companies in the world. In other words, he’s pretty comfortable.

In 2013, he became the first African to join The Giving Pledge, an initiative by US billionaires Bill Gates and Warren Buffett to donate half their fortunes to charity. The Motsepe Foundation is dedicated to fighting against racism and for diversity. It invests mainly in educational projects, but has also become involved in the fight against the coronavirus pandemic. Motsepe is regarded as a man who can pull the right stings, and has close connections to South Africa's political elite. His elder sister Tshepo is married to President Cyril Ramaphosa.

Motsepe has not yet made an appearance in his new footballing role. However, he has owned the South African first division club Mamelodi Sundowns since 2003, when he secured a majority stake. The "Brazilians", as the side are known because of their yellow and blue shirts, have won the South African championship ten times, the last three seasons in a row. But the biggest success in the club's history was an African Champions League triumph in 2016.

Motsepe does not accept failure, from himself or others. "You have to set high standards," the 59-year-old once said. "I can never be satisfied with a mediocre performance." Now he will be at the helm of African football for at least four years. As president of CAF, Motsepe will also become vice-president of FIFA, making him one of Infantino's deputies. But the South African is not considered a yes-man and may even become a serious rival to Infantino one day. Then the FIFA boss might regret using his influence in the CAF election.