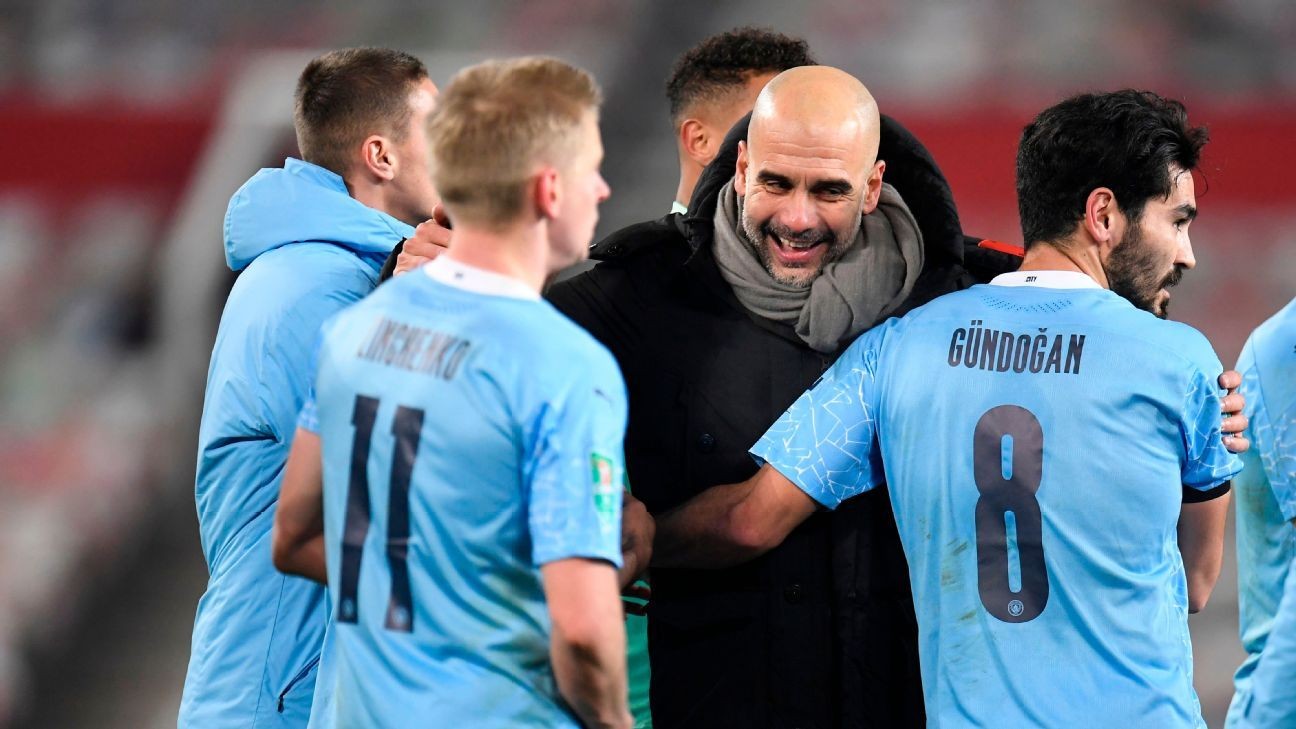 Manchester City boss Pep Guardiola's claims that players cannot help hugging each other during goal celebrations has been labelled as "ridiculous" by a leading United Kingdom politician.

Julian Knight, chairman of the Department of Digital, Culture, Media and Sport (DCMS), has criticised Guardiola and his players after the team became the latest to ignore social distancing rules and celebrated Phil Foden's winner against Brighton on Wednesday with a group hug.

Last week, the Professional Footballers' Association (PFA) reminded players to be careful when celebrating goals as the number of COVID-19 cases in England continues to grow.

However, teams have continued to celebrate in big groups and Knight said that players should be punished for breaching the rules.

"It's ridiculous to say it's just instinct, of course players can stop themselves doing it," he told the Times.

Was Bayern Munich's throwback kit to blame for their shock DFB Pokal exit?

"We've seen plenty of occasions in the past where someone does a special routine for a goal celebration similar to the dance routine you sometimes see in American football when someone scores a touchdown.

"Let's not have this jumping on top of each in the face of everything we are trying to deal with.

"I've read that it's not a bookable offence but surely it could be covered by unsportsmanlike conduct, and it should not be beyond the wit of the football authorities to ask referees to issue yellow cards in the same way they do when a player takes their shirt off in a goal celebration.

"We are all human, but we are trying desperately to get the message out there about keeping your distance so it is completely the wrong optics to see players piling on after a goal."

The Premier League has received another blow to the fixture schedule after Aston Villa's match against Everton on Sunday was the latest match to be postponed due to the continued COVID-19 outbreak at Villa's training ground.

Meanwhile, Leeds vs. Southampton, originally set for Jan. 20, has also been postponed to allow the visitors to fulfil their FA Cup third round clash with Shrewsbury Town, which had been cancelled due to rising COVID-19 cases.

Chelsea boss Frank Lampard was against the idea to book players for celebrating together and said footballers deserve credit for how they have dealt with the challenges of playing amid the pandemic.

"If people can get booked, that means they can probably get sent off if it was a second yellow card," he told a news conference ahead of Chelsea's match at Fulham on Saturday.

"I think it is going to be very difficult to police with keeping the energy and excitement that football brings.

"So they have been taking themselves into an environment where they are potentially maybe not putting themselves in danger but maybe the families they go home to -- a pregnant wife, a grandparent, a parent, a brother or sister -- so I think we have to understand footballers are human as well."