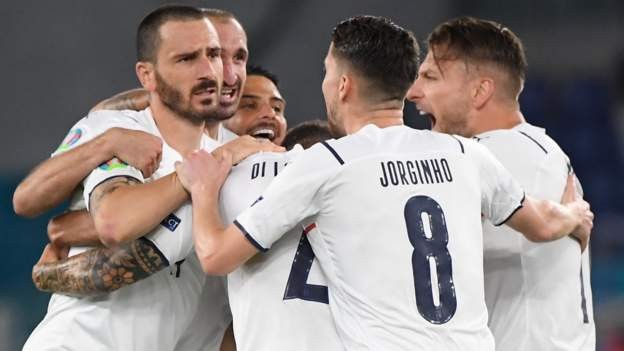 It started with a spine-tingling rendition of Nessum Dorma, featured some brilliant attacking play and ended with Italy jubilantly celebrating a defensive block.

The opening night of the European Championship could not have gone better for the Azzurri on or off the pitch in Rome - and it was an evening which neatly encapsulated the best of their past and present.

Few people had Roberto Mancini's side down as favourites to go all the way in this tournament but they were in fine form, scoring three goals in a Euros game for the first time - a remarkable stat given they have reached the final three times and won it once.

"They sent a little message out there to everyone," according to former England captain Alan Shearer.

It is a dramatic turnaround from the position they found themselves in three years ago, when they hit rock bottom with the unthinkable - failing to qualify for the 2018 World Cup.

They lost two of their first five games following the appointment of Mancini. But the ex-Manchester City manager has overseen a remarkable turnaround, with a zesty looking side that is unbeaten in 28, winning nine in a row and keeping clean sheets in all those games.

Former City defender Micah Richards said on BBC Radio 5 Live: "People will go over the top but you want the first game to be a bang and we certainly got that.

"Not only the players but the manager deserves huge credit for installing that confidence in the players."

Shearer said on BBC One that "Italy were a mess when Mancini took over", adding: "He changed the style of play. They were impressive in everything they did, not only with the ball but without it too."

Italy last hosted a match at a major tournament at the 1990 World Cup and there was a throwback before kick-off as world-renowned tenor Andrea Bocelli belted out Nessum Dorma to the acclaim of the 16,000 fans in attendance at the Stadio Olimpico.

Despite impressing at the top end of the pitch, the Italians have long been famed for the art of defending and veteran centre-back Giorgio Chiellini showed what it still means at the age of 36, punching the air in celebration following a late block on Turkey striker Burak Yilmaz to preserve a clean sheet.

"It will make people stand up and take notice," said former England defender Rio Ferdinand. "If you play against Italy you are going to have to perform. They got it spot on tactically with a system that works for them.

"There will be tougher tests that lie ahead but they dealt with Turkey emphatically. This will wake up a few people if they had any question marks about Italy."

With lynchpin midfielder Marco Verratti still to return, the in-form Italians will take some stopping.

Former Spain midfielder Cesc Fabregas added: "You can see it at the end of the game, they are all together and you feel it.

"They are friends and they want to play for each other."