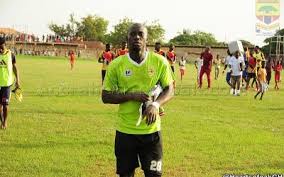 Hearts of Oak goalkeeper Samuel Akrugu was named as the starting goalie during WAFA's convincing 5-0 win over the Phobians and revealed that he was told by his team mates to fake an injury during the game.

During an interview on floodlight with Don Summer, he made it known that the incident happened when the score line was 2-0.

“I was the goalkeeper when Hearts of Oak conceded 5:0 at Sogakope WAFA."

“The players told me to fake an injury after conceding 2:0 in the first half and I told them I would rather concede more goals than to fake injury.”

“With Ben Mensah as our second Goalkeeper. After the game, the goalkeeper’s trainer decided not to give a call up to camp again, ” Akrugu is quoted

“I had a problem with the Goalkeepers trainer at hearts of oak then Jerry Agyei. I see myself as gentle and noble! I don’t want to have a problem with anyone so I just leave when the applauds is loud.