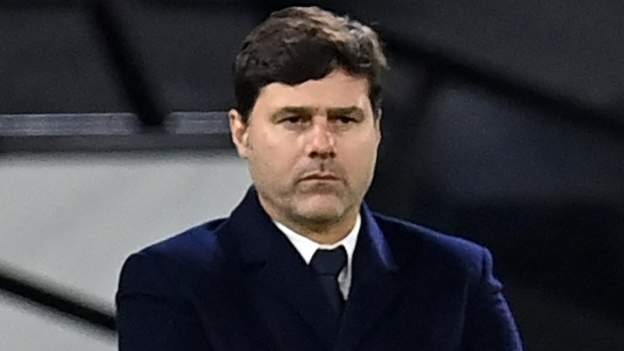 The Football News Show: Who will be the next manager of Manchester United?

Mauricio Pochettino will remain as Paris St-Germain manager and has "never asked to leave" amid links to the Manchester United job, says the French club's sporting director Leonardo.

Pochettino, under contract at PSG until 2023, is among the leading contenders to replace Ole Gunnar Solskjaer at Old Trafford on a permanent basis.

"He's never asked to leave and no club have contacted us in relation to him."

United are focusing on an interim boss to replace Solskjaer, who was sacked on Sunday after a 4-1 defeat at Watford left the club eighth in the Premier League.

Former player Michael Carrick is likely to remain in temporary charge for Sunday's meeting with Chelsea, although United are close to appointing German coach Ralf Rangnick until the end of this season.

What can Man Utd expect from Ralf Rangnick?

Meanwhile, former Real Madrid manager Zinedine Zidane is believed not to be interested in the United job and would prefer to consider the French national side or PSG should either position become available.

However Leonardo dismissed reports of contact between PSG and Zidane as "ridiculous".

"It's ridiculous to imagine that a meeting with Zinedine Zidane could have taken place in a big hotel in Paris in front of the eyes of everyone," Leonardo said.

"We have a lot of respect for Zinedine Zidane, what he did as a player and coach, but I can tell you very clearly that there is no contact and that no meeting with him took place."

PSG are 11 points clear at the top of Ligue 1 but will finish as runners-up in their Champions League group following Wednesday's 2-1 defeat by Manchester City.

Code Red: The race to save Raul Jiménez's life and his battle to returnShould historians be jealous? Josh Widdicombe's extraordinary family tree revealed