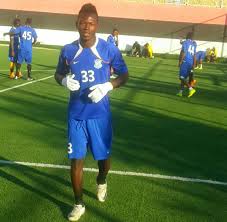 Arthur who is currently with  Angolan side GD Interclube has been amazing since joining the side a season ago.

The 22-year-old sharp-shooter netted eight goals in 12 appearances for the side as they finished 5th in the league and was named the club's player of the season.

And according to the hitman, Portuguese Liga NOS giants FC Porto and SL Benfica have expressed keen interest in acquiring his services in January.

"As a footballer, every country you choose to play should be a new challenge for you and by God's grace I did my utmost best put to succeed," Arthur revealed to Happy FM's Emmanuel Capito.

"Thankfully I achieved my target by attracting offers from the big clubs in Portugal [FC Porto and SL Benfica], but I'm only praying that everything goes well."