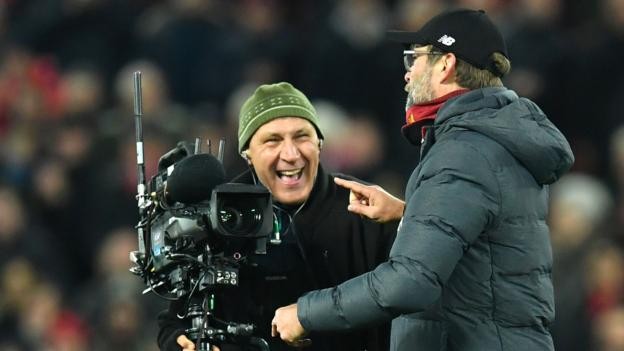 Ten games are being broadcast live in the UK... but none of them on traditional TV channels

Why are there Premier League games on at weird times this midweek? Why can't I find any in the TV guide? And will social media ruin goals for me?

These are valid questions. So what's going on?

It's all to do with Amazon's new deal with the Premier League - and BBC Sport has the answers.

There are 10 games being played this week, all either kicking off at 19:30 or 20:15 GMT - neither, of course, are standard kick-off times. All are available to watch legally in the UK.

Highlights include Jose Mourinho's return to Manchester United with Tottenham and the Merseyside derby.

How can I watch? Will it cost money?

The only way to watch these games is online, via streaming service Amazon Prime Video. Subscription to the service costs £7.99 a month - although it does offer a 30-day free trial.

Subscribers can stream the games on computers, phones, tablets and some smart TVs, set-top boxes, streaming devices and consoles.

How much did Amazon pay, and why is it doing this?

It is not known how much money Amazon paid for its 20-games-a-season three-year contract. It also has the exclusive rights for the Boxing Day round of games on 26 and 27 December.

BT Sport paid £90m for a similar package of 20 games a year.

The Premier League splits its games into several chunks, mostly shared by Sky Sports and BT, but it offered two small packages of 20 games to see if any online giants like Amazon, Netflix, Google, Facebook and Apple were interested.

England's top flight had hoped for a bidding war between those companies but it did not materialise.

It is thought the total spent fell short of the previous £5.14bn deal, given Sky and BT parted with £4.55bn for the three years.

Amazon sees it as a low-risk way to explore the potential of streaming Premier League games before deciding whether to mount a big challenge next time (from 2022-23).

It is, however, seen as a loss-leader. The reason it is doing this now is to attract customers to its website over the Christmas period, with its service also including free delivery on many items.

Why is it significant?

This is the first time 'televised' Premier League games in the UK will not be on a traditional TV channel. Setanta and ESPN are the only two channels before BT to show games alongside Sky.

Amazon will hope this goes better than it did for the last online broadcaster to show games in the UK.

Eleven Sports won rights for La Liga and Serie A on three-year deals at the start of last season. However, by February it no longer had exclusive rights for either and no longer shows any games from either league.

The major difference there, however, is that it had to build up a subscriber base from nothing - and at the start of the season had no options to cast to a TV.

How seriously is Amazon taking it?

Each game will be broadcast live and there will also be a separate goals show.

With staggered matches each day, fans will be able to watch the first half of a 19:30 GMT game and then the 20:15 GMT match (or an entire early game and then some of the later one).

Does Amazon cover other sports?

Rafael Nadal won this year's US Open, an event broadcast by Amazon

Amazon shows 41 separate events on the ATP Tour in tennis, including the US Open and ATP Finals.

Its first major event was the 2018 US Open, which did not go well. Some 71% of users who reviewed it on the website gave it one star out of five. Some complained about picture quality, the sound not syncing up, buffering and about the lack of functions - such as the ability to rewind or pause.

Since then things have improved. But the Times says Amazon has been talking to internet providers, with concerns the demand for Premier League games will cause streaming problems.

Will there be a delay as I'm streaming?

Yes, unfortunately you're going to see things a short while after they actually happen, so if you don't prepare properly you might know about a goal before you see it hit the back of the net. This is normal with online streaming.

Analysts from streaming firm Phenix said Amazon's broadcast of the US Open was often up to 45 seconds behind the TV transmission.

The BBC has worked out how to eliminate streaming lag - but it could take years for that fix to be implemented.

So for the meantime, fans might have to avoid watching the games alongside Twitter updates, text messaging or BBC Sport goal alerts. Or even, gulp, put your phone down for 45 minutes.