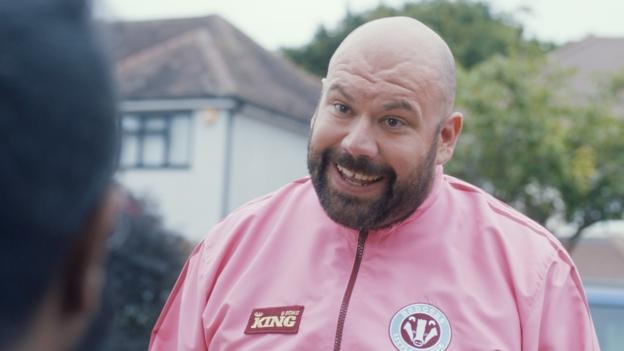 Manchester United are the only team to take points off Liverpool so far this season - but can they repeat that feat at Anfield on Sunday?

"I am more confident about a Liverpool win this time than I would usually be before this game - for obvious reasons," BBC football expert Mark Lawrenson said.

"Jurgen Klopp's side are just playing extremely well and they are really in the groove at the moment, especially at home.

"You also just sense with them that they are absolutely relentless and they will be desperate to beat United. The Liverpool players know that, along with Everton, this is the big game of the season in every single way."

Lawro is making predictions for all 380 top-flight matches this season, against a variety of guests.

This week he is up against actor and comedian Tom Davis, star of new sitcom King Gary, which is on BBC One on Fridays at 21:30 GMT. All six episodes are also available on iPlayer now.

Davis is a proud West Ham fan, who classes Paolo di Canio's famous volley against Wimbledon in 2000 as one of his best moments as a fan, even if the Hammers have not given him too much to celebrate over the years.

He told BBC Sport: "Why West Ham? I ask myself that question at the beginning of every season.

"But it is a club of real character, it is a club I love and, for every trial and tribulation they have put me through, I wouldn't change them for the world.

Gary coaches an under-nines team in episode two of King Gary but Tom admits he was not much use on the pitch himself. "I played football at a very average level," he explained. "I was a try-hard - I get in the way well, so I would call myself 'brick wall'"

"I love the Premier League full-stop, though. The excitement you get from watching it is not always West Ham-driven, like the Sergio Aguero goal when Manchester City won it in 2012, but the drama is just incredible.

"It is something you could not create by writing a script. Sadly, from a Hammers point of view, they seem to be more of a comedy a lot of the time, rather than a drama - unless they are going down."

A correct result (picking a win, draw or defeat) is worth 10 points. The exact score earns 40 points.

Watford are still going well under Nigel Pearson, while Tottenham just look a bit all over the place.

Jose Mourinho's side were better in the second half against Liverpool last week, caused quite a few problems and might have nicked a point.

But this is a tough game for Spurs. Watford boss Nigel Pearson is trying to ensure his side do not ease up after climbing out of the drop zone, because there are teams down there who are floundering.

The ball is rolling for the Hornets a bit now, which obviously helps, and Pearson just wants to keep this run going, but they will no doubt have a day soon where they mess up, don't play well, and end up beaten.

I don't think that will happen on Saturday, though, because Spurs are below their best.

It is going to be interesting to see how Mourinho approaches things without Harry Kane. In that scenario last season, they used Son Heung-min and Lucas Moura, but they were very much operating on the counter-attack.

One of the problems Spurs have got while Kane is injured is, if they cannot counter-attack, they struggle to break teams down - purely and simply because there is no-one to hold the ball up for them.

The Gunners will be without suspended striker Pierre-Emerick Aubameyang on Saturday after his red card at Selhurst Park - and it was definitely a red - which is a big blow for them.

We know how good Sheffield United are on the road, and they give everyone a game - full-stop.

The Blades have lost their past two away games, against Manchester City and Liverpool, but they were unlucky to end up empty-handed.

Chris Wilder's side showed against the Hammers that they can get over the line without playing well, which is another reason I'm backing them to spring a bit of a surprise here.

Tom's prediction: Mikel Arteta is doing a good job at Arsenal so far. 1-1

Aston Villa got totally taken apart by Manchester City last weekend, and just seem unable to string any sort of run of good results together.

Brighton, meanwhile, only lost by one goal against Everton but it could have been more - the Seagulls were not very good.

Both sides will see this as winnable game but Brighton have got home advantage and that is who I am backing.

Crystal Palace always seem to do well against Manchester City with what they have got, but it is hard to see them holding out against Pep Guardiola's side at the moment.

There is no way Palace will be as open as Villa were, but City are back on their game and they will find a way through.

Tom's prediction: Palace have done all right against City recently, but I think City will win this. 3-1

I keep waiting for Bournemouth to turn things around, but it does not look like it is happening.

Norwich's form is not much better and they were well beaten by Manchester United last time out.

Bournemouth need to stop the rot too. I have never really thought before that they could get relegated but, looking at them now, they are in big trouble.

Tom's prediction: Norwich to nick this - Teemu Pukki to get both their goals. 2-0

If I was making predictions for some of this week's fixtures a month or so ago, I would be tipping some very different outcomes - and this match is a good example of how much things have changed for some teams.

Danny Ings cannot stop scoring for Southampton and they keep on picking up points.

I just think their recent results show you the value of sticking with your manager because Ralph Hasenhuttl could easily have gone after they lost 9-0 at home to Leicester in October.

Wolves are one of the better sides in the division but even they have not been on a great run since the end of the year and, right now, you would have to make Saints favourites.

West Ham got beaten by Sheffield United last week, although they did have chances.

What would have been a late equaliser was disallowed for handball, because those are the laws of game - it is a rubbish law, but you have got to stick to them.

I still think David Moyes has had positive start to his return as Hammers boss, and the same obviously goes for Carlo Ancelotti at Everton - apart from when they went to Liverpool in the FA Cup, they have been good.

I think this will be tight, and West Ham will be happy to keep it that way.

Moyes is not going to play open, expansive football because he doesn't know some of his players yet, and they have not been playing well - you have got to understand that his priority will be to make it difficult for teams to play against them.

Tom's prediction: This is a massive game for us and a big game for David Moyes against his former club. We have got a bit of fire in us at the moment and I think we will win.

I like Moyes and I think he will steady the ship, which is what we need right now. I would love to see someone such as Joe Cole, a younger ex-player, come in as a coach and start sort of looking to the future but, for the time being, it seems like players like playing for Moyes, and that is the main thing. 3-1

Chelsea swatted Burnley aside pretty easily last time out and this is a good opportunity for them to build on that.

All the other teams who are just below them in the Premier League are looking inconsistent and it would be a good time for the Blues to kick on.

Newcastle put Rochdale away easily enough in the FA Cup this week but they have lost their two previous Premier League games at St James' Park and I don't see that run ending this weekend.

Burnley got swept aside by Chelsea last week and are on a bad run of results, with four straight league defeats.

But Leicester seem to have lost a bit of the self-belief and swagger that had propelled them up the table, and any thoughts of them seriously challenging for the title have now gone.

Their defeats over Christmas against Manchester City and Liverpool were to be expected - what was far more damaging was drawing at home with Norwich and getting beaten by Southampton in the same period.

The Foxes are still a good side and they will fancy themselves to win this game but I think we are going to see a reaction from Burnley here.

They usually bounce back a lot quicker than this and I have been waiting for Sean Dyche to turn things around - I am sure it will happen this week though.

United got their tactics spot on against Liverpool last time but their issue is that, in midfield, they are just not strong enough.

When I look at what they have got in that department, I am largely thinking 'that's why they have got so many problems' because the days of them having strong, competitive midfielders are gone.

It is Liverpool who have got a midfield unit now and they also have plenty of options without weakening. Their players know that, if they get in, they have to play well to stay in, otherwise they may not play again for a while.

Tom's prediction: Liverpool are the best football team on the planet at the moment; they are just on another level. And I think, after what happened when they played United earlier this season (a 1-1 draw), we will see a reaction from them. 5-1

How did Lawro do last week?

Last weekend, Lawro got five correct results, with no exact scores for a total of 50 points.