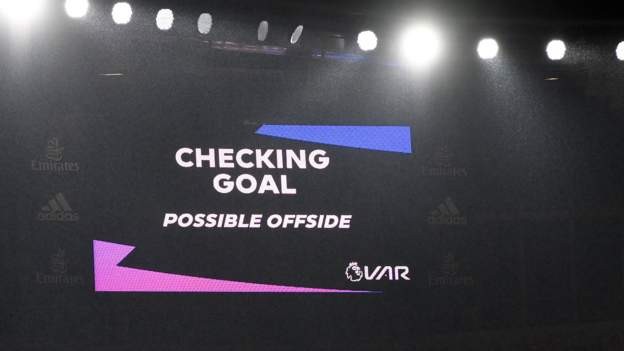 The Premier League will use thicker lines when using the video assistant referee to assess offside calls next season.

The change is hoped to eliminate more of the marginal offsides which led to huge criticism last campaign.

There were several instances where a player's toe or armpit led to goals being ruled out, which fans and pundits felt was ruining the game.

The decision was taken in Thursday's Premier League shareholders meeting.

Thicker lines are allowed by football's law-makers and already in use in the Netherlands.

Premier League referees' body aims to improve use of VAR VAR - is it a hit or miss in football?

Referee's chief Mike Riley also presented the results of a survey sent to Premier League managers, captains and directors of football which asked for feedback on VAR.

That came after an acceptance that the consistency of decision-making suffered last season, with the findings from key figures at clubs intended to help referees improve.

Despite that inconsistency, shareholders were also shown that the time taken for the VAR to make a decision was on average quicker than the previous season.

MOTD Top 10 Euro Specials: The players and moments that have lit up the tournaments

Tracking down Bear Grylls: Jamie and Spencer get hold of the renowned adventurer