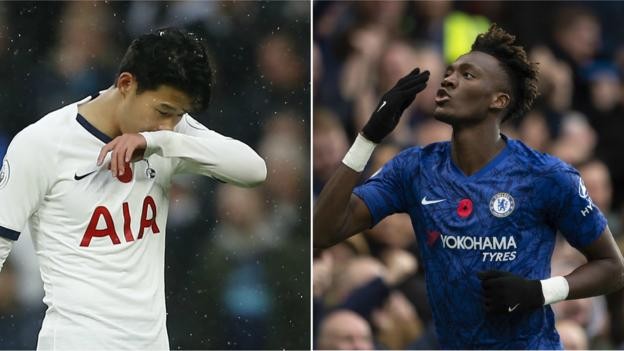 Tottenham dropped more points in the Premier League on Saturday but Chelsea's impressive run continued with a sixth league win in a row.

Spurs were held 1-1 at home by Sheffield United, meaning Mauricio Pochettino's side have failed to win any of their past five league games.

Son Heung-min put Spurs in front but George Baldock equalised for the Blades, who are now fifth in the table.

Earlier, Chelsea climbed to second with a 2-0 victory over Crystal Palace thanks to goals from Tammy Abraham and Christian Pulisic.

Everton increased the pressure on Southampton manager Ralph Hasenhuttl with a 2-1 victory at St Mary's, as Tom Davies and Richarlison scored either side of Danny Ings' equaliser.

The Saints, who stay 19th, were booed off at full-time as some home fans threw their scarves on to the pitch.

West Ham's winless run extended to seven games in all competitions as they were beaten 3-0 at Burnley, and they are just two places above the relegation zone.

Newcastle are up to 11th after coming from behind to beat Bournemouth 2-1 through goals from DeAndre Yedlin and Ciaran Clark.

Arsenal travel to Leicester in Saturday's late kick-off at 17:30 GMT.

Reaction from all of Saturday's Premier League games