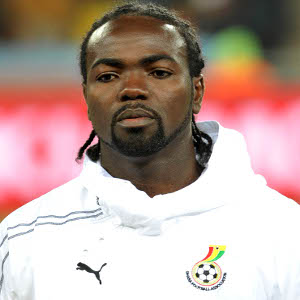 Former Ghana and Hearts of Oak star Prince Tagoe has given reasons why experienced footballers decline to return to the Ghana Premier League.

Tagoe, who is yet to announce his retirement from professional football told Angel TV that, experienced footballers are unwilling to return home at the twilight of their career because of the awkward behaviour from the supporters, citing Asamoah Gyan’s incident as an example.

The all-time top scorer for Ghana was booed during Saturday's Ghana Premier League encounter between his Legon Cities side and Asante Kotoko.

The veteran Black Stars forward was a second-half substitute as Emmanuel Gyamfi scored to give visiting Kotoko a 1-0 win at the Accra Sports Stadium.

He came on in the 75th minute, when the Royals were desperately throwing everyone forward in search of an equalizer, and immediately drove a free-kick just over the bar with his first touch of the ball.

But the striker could not save them as they lost 1-0.

In more than 15 minutes he spent on the field, Gyan was booed by Kotoko fans any time he touched the ball.

However, according to Tagoe, for Kotoko fans to boo Gyan for joining Legon Cities over the Porcupine Warriors is null and void, describing it childish and unnecessary act from the fans.

Speaking on Angel TV, he said, “I think what happened to Gyan tells the kind of country we are leaving in. Ghanaians fancy the downfall of people instead of lifting them. I didn’t expect such thing to happen, what happened was disgusting because he is here to help raise the standard of the Ghana Premier League”

He continued that, “His presence in the league is a plus because the young ones are learning a lot from him. We have a lot of players who are willing to return to the GPL but what is preventing them from coming, it is because of something like this”

“Gyan has not taken money from any one. Though he had an intention to play for Kotoko but if one reason or the other he is unable to join them it doesn’t mean they should boo him because it might be that Kotoko were unable to meet his demands”

“I think it is unnecessary because Gyan has made his name in the game so we should be proud with what we have. I will not be surprise if Asamoah quits the GPL. I think it was a childish act from the fans”